A member of staff from the University of Bath, Sophie Oldacres, will lead a peloton of cyclists on a gruelling three-day ride from the Eden Project in Cornwall to Westonbirt Arboretum later this week. 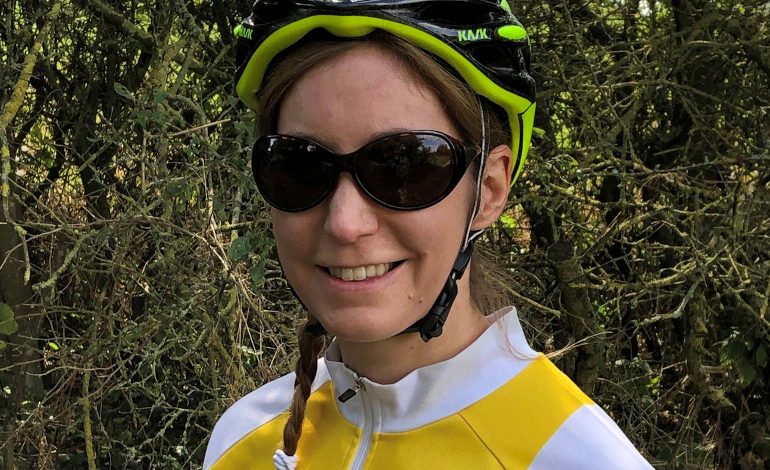 Mum of two Sophie, who tragically lost her husband Simon to brain cancer in 2016, is using her own personal experiences to raise awareness of brain tumours and to raise vital funds for the charity Brain Tumour Research.

In 2013, Sophie’s husband Simon was diagnosed with the aggressive and incurable brain cancer glioblastoma. He died just three years later in 2016 aged only 37.

Brain tumours like Simon’s are the leading cause of death in children and adults under 40, yet, despite this, brain tumour research receives less than 1% of national cancer funding.

This year’s ride, which complements previous fundraising efforts that Sophie has organised over recent years, starts at the Eden Project on Friday 20th September and finishes at Westonbirt two days later, on Sunday 22nd September.

The Eden Project and that part of Cornwall was a much-loved family holiday destination, where there is a bronze leaf dedicated to Simon.

The family enjoyed regular day trips to Westonbirt from the family home in Chippenham where there is also a tree dedicated to Simon’s memory.

Simon was a keen cyclist, and post-diagnosis in 2013, Sophie has spoken about how a good cycle was his equivalent to counselling.

He rode to many of his appointments at the BRI in Bristol from Chippenham, which was always recorded in the oncologist’s notes because it was so unusual.

A group of nearly 20 cyclists will complete the three-day 300-kilometre cycle, with more expected to join on the final day.

Sophie, who works at the University of Bath, explained: “There is no doubt that this year’s route will be gruelling for us all but it’s a hugely fitting route given the start and end points.

“Simon loved both the Eden Project and Westonbirt and would have loved the thought of us cycling between them.

“Three years on from his death, life really does not get any easier. But it’s my hope that by keeping his memory alive and by raising awareness of brain tumours we can go some way to challenge the unacceptable lack of funding in this area and raise much-needed funds to unlock new research that will make a difference.

“We need to move towards a place where in the future other families facing similar diagnoses have real hope of a cure.”

Sophie will be cheered over the finish line by her young children Joseph and Esther.

At the University of Bath, research is taking place to try to improve outcomes for people like Simon, diagnosed with brain cancer.

One particular project, involving Dr Lorenzo Caggiano from the Department of Pharmacy & Pharmacology, is using molecules found in daffodils as an active ingredient for treating tumours.

Dr Caggiano explained: “Flower farmers have known for thousands of years that a freshly cut daffodil ‘narcissus’ placed in a vase with other flowers will cause them to wilt and die prematurely.

“This simple observation led to the discovery that some molecules found in the daffodil bulb inhibit the growth of other plants, but much more importantly, that they also inhibit cancer in humans.

“These molecules are notoriously difficult to isolate, but through our research we’re developing new synthetic forms that are easier to make, yet still retain their potent therapeutic anti-cancer properties.

“Funding from charities, such as Brain Tumour Research, is essential in developing this work and we are very grateful of all of Sophie’s fund-raising activities to-date and fully support her latest challenge Ride4Simon 2019.”

Gordon Seabright from the Eden Project added: “We are delighted that Eden is going to be the starting point for this amazing event and we would like to wish Sophie and all the cyclists taking part the best of luck, raising money for a very worthwhile charity.”

A representative from Westonbirt, the National Arboretum said: “We are so happy Sophie has chosen to end her journey at Westonbirt Arboretum, and wish her all the best for her cycle ride.”

You can find out more about the ride and donate at: https://www.justgiving.com/fundraising/ride4simonoldacres2019.