Biological Engineers at the University of Bath have developed a test that could help medics quickly diagnose urinary tract infections (UTIs), using a normal smartphone camera. 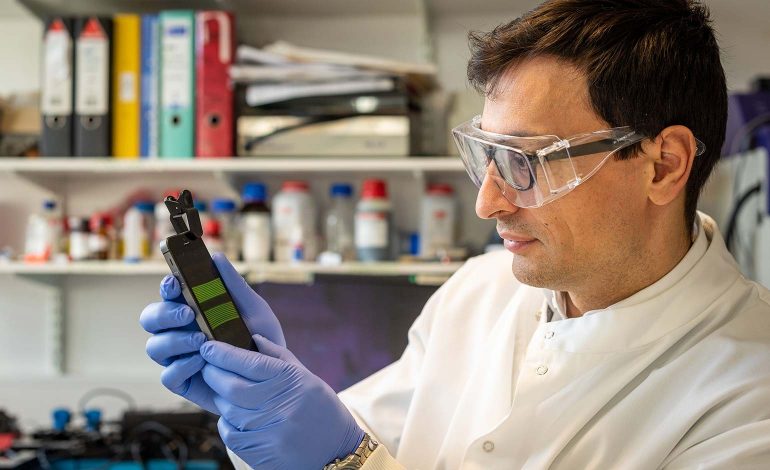 Similar in principle to a pregnancy test, the process can identify the presence of harmful E. coli bacteria in a urine sample in just 25 minutes.

As well as being far faster than existing testing, it could make accurate UTI testing more widely available in developing nations and remote regions thanks to its potential to be made portable, and far more cheaply than existing lab-based tests.

E. coli is present in 80 percent of bacterial UTIs, so if it is found it tells medical professionals that an antibiotic treatment is needed.

As well as a smartphone camera, the test, which could be adapted to detect a variety of bacterial infections, takes advantage of widely-available reagents and new micro-engineered materials.

Researchers say the simplicity of the test, which has now passed the proof-of-concept stage, could deliver a new way to quickly identify treatments for patients in poorer or remote regions.

Described in the journal Biosensors and Bioelectronics, the test uses antibodies to capture bacterial cells in very thin capillaries within a plastic strip, detecting and identifying the cells optically rather than through the microbiological methods currently used.

Dr Nuno Reis, from Bath’s Department of Chemical Engineering, led the development of the test.

He said: “The test is small and portable – so it has major potential for use in primary care settings and in developing countries.

“Currently, bacterial infections in UTIs are confirmed via microbiological testing of a urine sample. That is accurate, but time-consuming, taking several days.

“We hope that giving medical professionals the ability to quickly rule in or rule out certain conditions will allow them to treat patients more quickly and help them make better decisions about the prescription of antibiotics.”

The lack of rapid diagnostics for UTIs has in many cases led to a catch-all prescription of potentially unnecessary antibiotics, which increases the risk of bacteria becoming resistant to treatment – accepted as one of the biggest threats to global health and development.

The test is carried out by passing a urine sample over a ridged plastic micro-capillary strip, containing an immobilising antibody able to recognise E. coli bacterial cells.

If E. coli is present in the sample, antibodies in the reagents will bind with it, stopping it from passing through the section of plastic strip. Finally, an enzyme is added that causes a change in colour that can be picked up by a smartphone camera.

The system also measures the concentration of E. coli in the sample by analysing an image taken by the camera. The procedure is simple and could be manually operated or fully automated without any need for a mains power supply.

To date, bodies such as the United States Food & Drug Administration (FDA) have not granted approval to techniques that use smartphones – citing the potential for both non-lab conditions and software updates to the phone to make tests unscientific.

But Dr Reis hopes that the way the test uses a variable scale to digitally compare the pixels within an image will convince regulators to allow the treatment to move toward eventual production.

Dr Reis added that wealthier nations could also benefit from adopting the methodology, as it could make testing within primary care facilities such as GP surgeries more viable, reducing the need to send samples to central labs for testing.

He said: “The UK and wealthy countries have seen a big shift to decentralised diagnostics to reduce the load on national or regional labs and provide doctors with important tools to make informed diagnoses.

“Driving more of this will bring better outcomes to patients in terms of speeding up the process, but will also lower the cost to healthcare providers.

“We are not talking about replacing centralised diagnostics services but providing the first point of contact with affordable and rapid tools to support prescription of antibiotics and avoid their overuse.”

The next step for the process is clinical trials, which will require collaboration with clinical and commercial partners.

Beyond this, the team will shortly begin working on refining the test to allow for the detection of other bacteria and their concentrations, which will help prescribe correct dosages and avoid the overuse of antibiotics.

Dr Reis concluded: “The smartphone solves one of the biggest problems of the decentralising of diagnostics because their capabilities are actually very sophisticated in certain conditions.

“They offer the same functionality as sophisticated scanners that have until now been available only in labs.”