More than 100 people from the festival and events industry joined a panel of heavyweight creatives in Bath to discuss the challenges and opportunities faced by festival organisers in 2018. 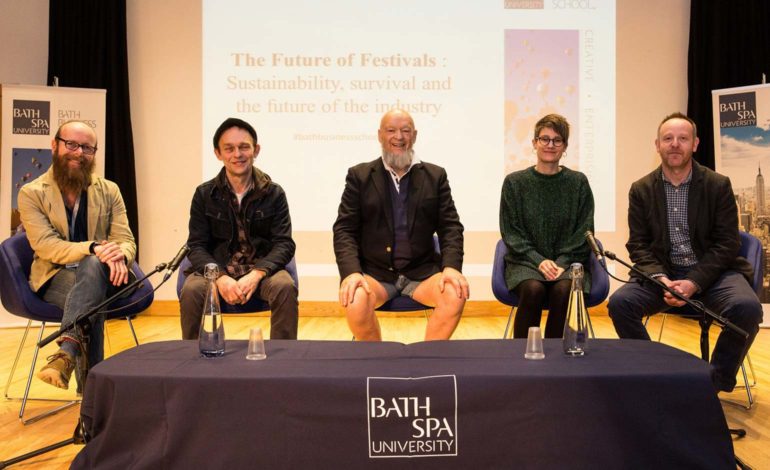 The event, which was held at Bath Spa University as part of Bath Business School’s Creative Business Network series, was an opportunity for students and professionals to pick the brains of some the industry’s leading figures, including Doug Francisco, founding member of The Invisible Circus; Michael Eavis, founder of Glastonbury Festival; Phil Castang, director of creative learning and engagement at Colston Hall; and Judith Robinson, head of programming at Bath Festivals.

Some of the main themes to emerge from the event included sustainability and accessibility, media representation of large-scale music events, the value of fringe festivals and whether we’ve reached ‘peak festival.’

Sustainability is high on the agenda for festival and event organisers. This is especially true of Michael Eavis whose Glastonbury Festival attracts 200,000 people through the farm gates each year.

He has an army of people working with him to help reduce the impact the festival has on the environment and says they’re choosing to work with sustainable materials, like bamboo, and encouraging people not to use plastic where possible: “There’s a war on plastic going on and we want to do our bit. In fact, we’re working towards becoming a totally plastic-free festival.”

John Cullum, chair of Bath Festivals and father of well-known musician, Jamie Cullum, asked the panel’s view on the value of fringe festivals.

Phil Castang said: “Culture is happening everywhere and different communities recognise it in different ways. These communities have a huge impact on the potential success of an artist, which is why I think fringe events are intrinsically linked to the main festivals.

“People don’t always get to the heights of Glastonbury first time; it can take playing the fringe circuit first to get noticed.”

Discussing whether or not we’ve reached ‘peak festival’, Doug Francisco added: “You could say the market has become saturated, but what’s good about having lots of festivals is that they conjure creativity, the free association of people and the exchange of ideas inside what is considered a very free space, despite the fences and boundaries we’re forced to have these days.”

Phil Castang continued: “You can’t stop people from having ideas and you can’t stop creativity; people will always find a new space, see a new movement or do something that’s not being recognised – that’s music history, so there will never be too many festivals.”

Technology is one of the many ways that festivals are changing and evolving. Asked whether it has a part to play in engaging new audiences, Judith Robinson said: “Technology is really important in attracting new audiences as it can help spread a festivals’ message beyond traditional means and simply to existing audiences.

“I feel strongly about creating a legacy of these festival moments, especially for the people that can’t be there with us, and we can do this by sharing content and ideas through the use of technology. As long as it is used in the right way and in a positive way, I think it’s a force for good.”

Darren Hoad, who chaired the event and is the pathway leader for festivals and event management at Bath Spa University, said: “We are absolutely thrilled to have had such a renowned line-up of industry speakers join us for our debate about the future of festivals and events.

“As an industry it faces huge challenges, many of which were raised by members of the audience, but with that comes an opportunity to learn, evolve and progress.

“It was fantastic to hear from Doug, Michael, Phil and Judith on how they are responding to the challenges and what they predict could be ahead for the next generation of festival organisers.”

As well as the Q&A, guests were treated to live music and a stage production showcase from Hot Cheeks, the team behind the Glastonbury Glade area.

Bath Spa University has been teaching business and management to its students since 1997. In 2015, the Bath Business School was established to accommodate growing student numbers and demand for its courses, including the BA (Hons) Business and Management (Festivals and Events).

The course teaches students the theory behind organising successful festivals and events, as well as providing on-the-ground practical experience with the School’s many industry links, helping them develop the core skills they’ll need to gain employment in the industry.

Members of staff from Glastonbury Festival regularly attend the University to deliver lectures, and in 2016 two students gained work placements at the festival as part of their courses.