Chris Anderson, a businessman, entrepreneur, and the owner and curator of the TED organisation, has received an Honorary Degree as Doctor of Education from the University of Bath. 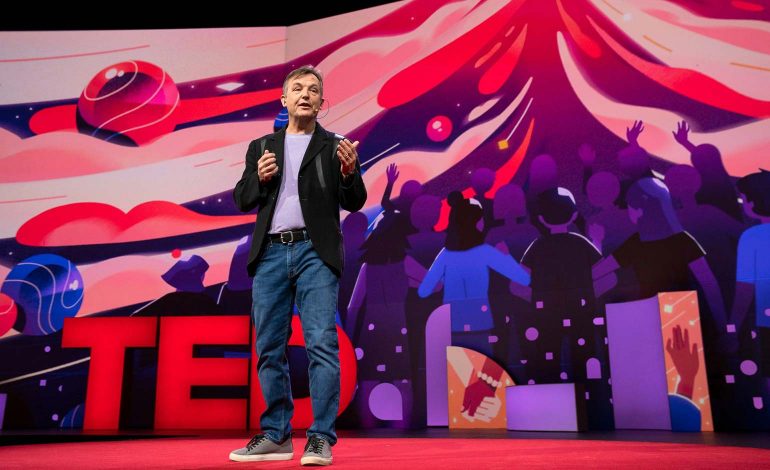 TED, which originated as the Technology, Entertainment and Design conference in 1984, is now a non-profit media organisation which freely distributes talks given by experts on a wide variety of topics, under the slogan ‘Ideas worth spreading’.

Chris said: “Many of the highlights of my life — both my school years and building a media company — have been spent in Bath, so it’s both a treat and an honour to return to the city.

“It’s a place I will forever associate with charm, beauty, learning and creativity.”

The founder of Future Publishing, which now employs 1,200 people worldwide and is headquartered in Bath, Chris was educated just outside the city at Monkton Combe School.

He started the company using a £25,000 bank loan, after seeing the potential of publishing computing magazines after working as editor of two early UK titles – Personal Computer Games and Zzap!64.

After expanding Future and setting up new titles focused on an increasingly wide variety of subject areas, he developed a presence in the United States, building Imagine Media and creating Business 2.0 magazine as well as the popular video games website IGN.

Thanks to these successes, in 1996 he established the private non-profit Sapling Foundation (the body that purchased TED) and in 2001 left his role at Future to focus full-time on TED, which he restructured as a non-profit organisation.

The TED Conference, and TED Talks, have grown hugely in popularity over the past two decades with many of the talks – for which speakers are not paid, and which last no longer than 18 minutes – racking up viewing numbers in the millions.

The broad range of subjects covered in the filmed talks – which number over 3,200 – includes science, politics, business, the arts and global issues, making the TED brand influential around the world.

Chris has also broadened the scope of TED during his tenure, with the organisation awarding the TED Prize annually from 2005 to 2017 to provide winners with $1,000,000 to follow a specific goal they believe will change the world. Winners include musician Bono, marine biologist Sylvia Earle, and chef Jamie Oliver.

In 2018, the prize was re-envisioned as The Audacious Project, which has already set up initiatives including the Centre for Policing Equity; the Educate Girls initiative, which aims to get 1.5 million girls in India into school; and the One Acre Fund, which plans to improve the prospects of farming families in sub-Saharan Africa.

Chris is also the host of the podcast The TED Interview.

Professor Richard Joiner, from the University’s Department of Psychology, who proposed the award, said: “Chris Anderson was educated and worked for many years in Bath, turning Future into a major local employer.

“His work in turning TED into a provider of freely available expert knowledge on a huge range of topics shows that he is an outstanding individual, a master communicator and an educator.

“He thoroughly deserves the recognition of this Honorary Degree.”