Bath Spa University has unveiled the new-look Herman Miller factory, which it has been restoring for the past few years, transforming it into a new state-of-the-art facility known as Locksbrook Campus. 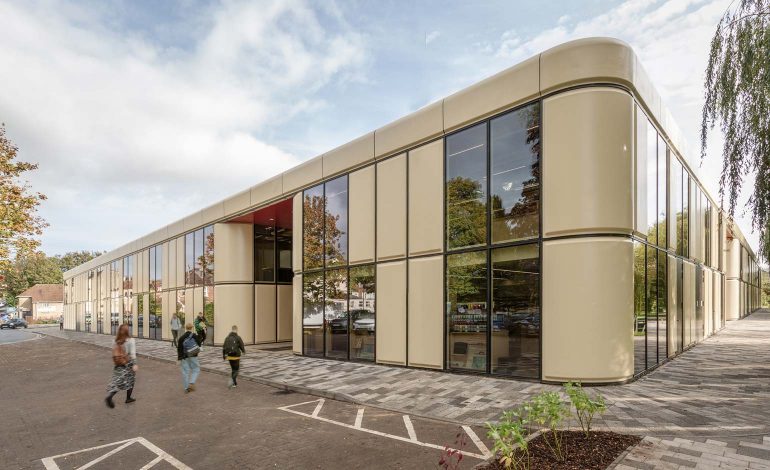 The building has become a purpose-built space for students and the local community.

Located next to the River Avon in Bath, the open-plan building has technical workshops surrounded by open, flexible studio spaces, as well as large, open social areas.

Originally designed by Sir Nicholas Grimshaw for Herman Miller, the American furniture manufacturers in 1976, Bath Spa University has worked with Grimshaw Architects and constructors Willmott Dixon to ensure many historical features were kept in the redesign.

Outside, the original 1970s iconic wall panels have been cleaned, restored, insulated and repainted.

Inside, the existing concrete flooring has been finished with a clear varnish seal so the history of the building, including trench marks, can clearly be seen underfoot.

Dr Dan Allen, Head of Art at Bath Spa University, said: “The building was originally designed as an adaptable space that can ‘change with grace’ to meet the needs of its users.

“As an iconic furniture factory, this building is part of Bath’s industrial history so it was vitally important to us to keep the integrity of this remarkable industrial, flexible space and celebrate this in the redesign.

“The marks of the building’s history can clearly be seen in the concrete floor, the iron-work and colour scheme.”

As the doors swing open, Kerry Curtis, Head of Design at Bath Spa University, said: “In art and design here at Bath Spa, we talk a lot about ‘thinking through making’, so right from the outset, we placed students and their creative practice central to the design of the new campus.

“Locating the immense workshop facilities in the heart of the building provides focused support from specialist art and design technicians, and the ability for students to move seamlessly between materials and processes. It is a truly stunning environment for students to flourish.”

Martin Crandon, Capital Projects Manager at Bath Spa University, explained how the university has worked with B&NES Council, Grimshaw Architects and Herman Miller to bring the iconic building back to life.

He said: “We’ve taken extra measures to protect the local bat population along the riverside of the newly refurbished campus.

“The River Avon is a protected nature corridor, with many different species of bats coexisting along the river’s edge that could be displaced due to light pollution.

“It was hugely important to everyone involved in the project that we created a building that works well for the natural environment and for the students that’ll be using it, so we partnered with B&NES Ecologists and Lighting Engineers to fit internal louvres to the large glazed windows which have allowed us to keep the architectural integrity of the building while protecting the local bats, and we are thrilled with the outcome.”

Martin continued: “In keeping with the original use of the building, we’ve partnered with Grimshaw Architects interior design team and with Herman Miller to design and place furniture in the main atrium of the campus, including chairs and sofas and a beautiful, bespoke reception desk.”

The university is welcoming members of the public, especially local residents, to visit the new building and make use of the cafe, shop and exhibition spaces.