Staff from Bath Spa University recently took part in a year-long programme of cultural exchanges, that celebrated the cultural ties and history between the UK and India. 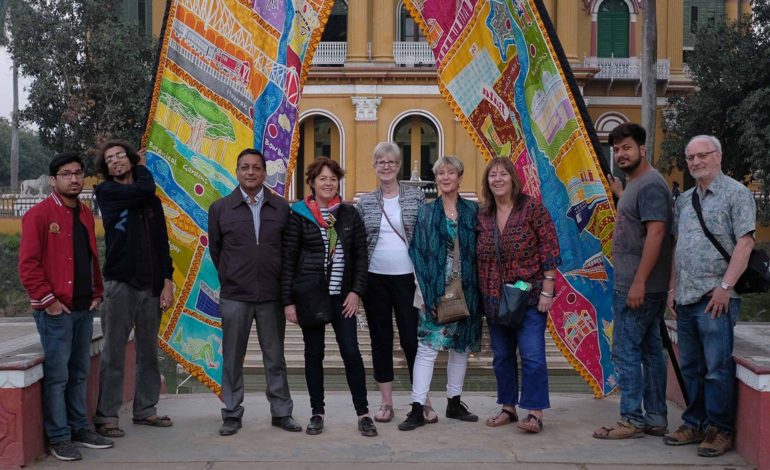 The Silk River programme launched last February at an official ceremony at Buckingham Palace and was part of the UK-India Year of Culture 2017, a government initiative that marked the seventieth anniversary of Indian-independence.

Led by internationally renowned arts company Kinetika and supported by the Arts Council England and British Council, Silk River explored the relationship between twenty communities living alongside the banks of the rivers Thames and Hooghly.

As part of the programme, a team of international artists, writers and photographers led by Kinetika’s founder and Artistic Director Ali Pretty, worked together to gather stories from people living and working alongside the River Thames and River Hooghly.

Twenty hand-painted hand-woven silk scrolls were created to show the shared heritage between each community.

Two performative walks were held to celebrate the end of Silk River. The Silk River UK walk took place in September and saw staff from Bath Spa University walk from Kew Gardens to Southend over the course of ten days.

The Silk River India walk took place last month. Over the duration of twelve days, staff from Bath Spa University travelled from Azimgani, Murshidabad to Batanagar, Koltaka. They were joined by UK delegates and key members from each of the ten River Hooghly communities.

They met with members of the community to discover the rich heritage of the region and participated in a series of talks and cultural programmes which raised awareness of the UK and India’s relationship.

The twenty scrolls were carried by participants from each walk from the starting destination to the end destination.

Last month staff from Bath Spa University travelled to India to attend an official closing ceremony at the Victoria Memorial Hall in Koltaka.

Mike Johnston, Senior Lecturer in Broadcast Media Production at Bath Spa University, interviewed key partners and documented the walks. He attended artist workshops in the UK and India, and photographed the development of the scrolls.

He said: “I have been involved with Silk River since last year. The scrolls were exhibited at Kew Gardens for a week before the emphasis moved back to India. The walk in India was very successful. We had a significant turnout from British and Indian participants.

“The Victoria Memorial Hall is an incredible building and it was great to have the closing ceremony there.”

The scrolls were paraded at the closing ceremony where dancers and musicians performed. Representatives from each of the ten River Thames and ten River Hooghly communities attended the ceremony along with the British Council and the West Bengal Government Home Secretary.

Sir Dominic Asquith KCMG, said: “It’s been inspiring what we’ve been seeing, not just the colours but the enthusiasm, the amount of determination and commitment over the years to make this a reality.

“It’s what I call the living bridge – it is bringing communities together in the UK and India in a way that is really relevant to the communities that they exist in.”

Alan Gemmell OBE, added: “Silk River has been at the heart of our mission to use the Year of Culture to celebrate the modern day relationship between our two countries, to connect with people and to inspire them to build a relationship for the next seventy years. It’s been a wonderful event.”

The scrolls were exhibited at the Victoria Memorial Hall after the ceremony.

He said: “It has been a great pleasure working with Kinetika and Mike Johnston on Silk River. It’s always fantastic when our students get to work on high quality client projects.”

Kevin Rushby, Travel Journalist for The Guardian participated in both walks and wrote a daily blog about each route for the Silk River website.