The Bath city centre neighbourhood policing team will move into an expanded space in Manvers Street under a deal agreed between B&NES Council and Avon and Somerset’s PCC Sue Mountstevens. 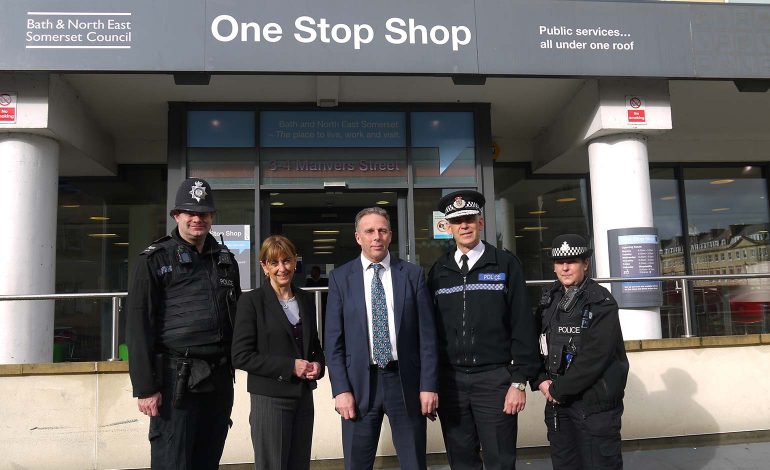 The expanded police office will be located in Lewis House on Manvers Street and will see the current police presence of an enquiry office and hot desks extended to base the neighbourhood policing team.

Councillor Tim Warren, leader of the council, said: “I’ve been working with Sue Mountstevens for some time and I’m extremely pleased our efforts to establish a new police station in Bath have come to fruition.

“This is a huge boost for our city. Ever since the closure of the old police station residents and businesses have been asking for an increase in local police presence to provide much-needed reassurance and to help keep our communities safe.

“I am therefore delighted that we have been able to secure this move of the Bath neighbourhood policing team to Lewis House, providing local policing from the heart of our city.”

Sue Mountstevens, Avon and Somerset Police and Crime Commissioner, added: “I’m pleased that we can increase the neighbourhood policing presence in the heart of the city opposite the very site of the old police station.

“While the policing resources for Bath have not changed I hope that residents will be reassured by our commitments to the city, thanks to the support of Bath and North East Somerset Council.”

“However, it’s great to have the opportunity to expand our public enquiry office and neighbourhood base for a more visible policing presence. We’re grateful for the support of our commissioner and Bath and North East Somerset Council in bringing this about.

“It reinforces our commitment to locally-based neighbourhood policing. Bath is a safe place and we look forward to continuing to work with local people and Bath and the council to make sure it remains a great city to live, work and visit.”

Over the coming months, subject to finalising the details, work will be carried out to alter the building to meet the needs of the police, and the space will be rented by the Police and Crime Commissioner.

Expansion of the existing police office in the One Stop Shop will mean officers are based there seven days a week. Currently, the police desk is only open 10am to 6pm, 5 days a week but under the new plans the opening hours will be extended from 7am to 1am on Mondays to Fridays.

The One Stop Shop will continue to operate from the ground floor, but with a reduced footprint to reflect changing customer demand and planned operational changes to the service.

Councillor Bob Goodman, cabinet member for Development and Neighbourhoods and Chair of the Community Safety Partnership, said: “It’s essential we have a police station in the heart of our city. This new arrangement is a win-win for the police and reflects partnership working at its best.

“As well as working closely with the police on this new base at Lewis House, the council is also committed to helping people feel safe through measures such as CCTV.

“Bath is a safe city but it needs and deserves a high-quality police presence and I am sure that local people will see a tangible difference once these moves have been made”.

Bath MP Wera Hobhouse has welcomed the news, after campaigning for a return of a police station to the city centre. She said: “This decision demonstrates that the ‘powers that be’ locally listen when people get together.

“I want to say a massive thank you to everyone who signed and shared my petition, and got momentum behind this campaign.”

“I’m looking forward to seeing more detail, opening hours will be vital to the success of this service for example. I hope this development makes it easier for residents to access the police service, enables officers to do their jobs to the highest standards, and ultimately, makes the city safer for residents and visitors!”

“The reinstatement of a single location for enquiries and neighbourhood policing is to be welcomed, and I hope this will allow improved partnership working between public sector organisations.”

“One crucial issue will be the opening hours for public inquiries, which were cut under the previous multi-site arrangement; I would like to see more access for the public, particularly at weekends.”