A father-of-two who survived a cardiac arrest has been reunited with the police officers and paramedics who saved his life at a roadside lay-by. 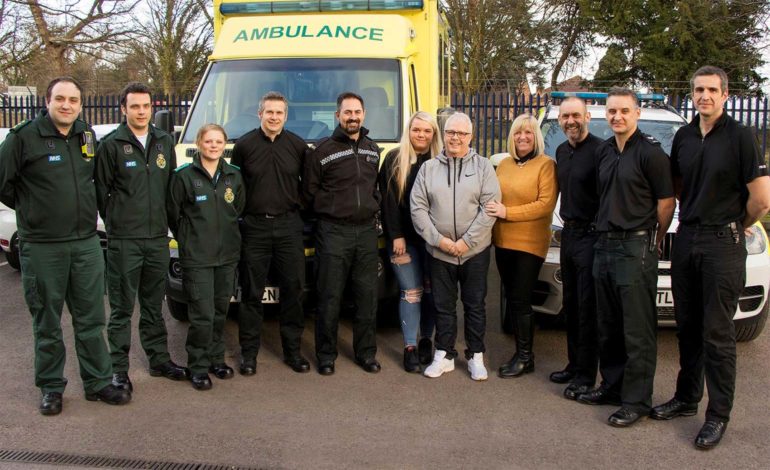 54-year-old Ian Cains, who works as a porter at the University of Bath, fell ill at home late at night and was being driven to hospital when his heart suddenly stopped beating.

His family pulled together – as son Charlie, 19, ran to get help; daughter Ellie, 18, dialled 999; while wife, Nicky, stayed at her husband’s side.

Ambulance crews arrived at the rest area outside MOD Abbey Wood in Bristol, after a nearby police firearms team found Mr Cains slumped on the back seat of the car.

Ian and his family met the emergency services personnel on Tuesday, 16th January, for the first time since the incident in the early hours of 19th November 2017.

“I’d like to personally thank the police and paramedics for saving my life,” he said. “I have no recollection of what happened, but I am very grateful for what they did.”

Ian was at his home in Longwell Green near Bristol when he became unwell at around 12.30am.

Charlie drove his father to hospital with the rest of the family, but they were forced to stop beside a busy junction when Ian lost consciousness.

Nicky said: “Ian had said he didn’t feel well, but we really had to persuade him to go to hospital.

“In the car he made a funny noise. He stopped breathing and starting dribbling. I couldn’t find a pulse. We didn’t know if he would survive. It was very traumatic.”

Charlie flagged down a police firearms team who were inside their vehicle at a junction, waiting for the traffic lights to turn from red to green.

They pulled him out of the vehicle, and began to administer CPR and defibrillation.

Firearms officer, Ian Womack, said: “We did what we could for Ian. In the circumstances, I feel we left him in the best possible condition for the paramedics. It was great teamwork.

“I was so happy to hear Ian was alive and well. It shows how beneficial it is to be able to put First Aid training into practice.”

Ian was given several defibrillator shocks, before being transferred by ambulance to the Bristol Royal Infirmary.

Ian was put in a coma for 48 hours, because there was a lack of oxygen to his brain. But he has since made a good recovery.

Michael said: “With a cardiac arrest, it’s all about getting there as soon as possible. Thankfully the police were in the right place at the right time, and between us we were able to give him prompt treatment.

“This case shows that prompt CPR and defibrillation can mean the difference between surviving or not. We were also joined by Jules, a basics doctor who responded promptly to the incident, he performed advanced interventions at the roadside. I was delighted to hear Ian had survived.”

Ian and his family attended the Almondsbury police operations department on 16th January to express their thanks to the police and paramedics.