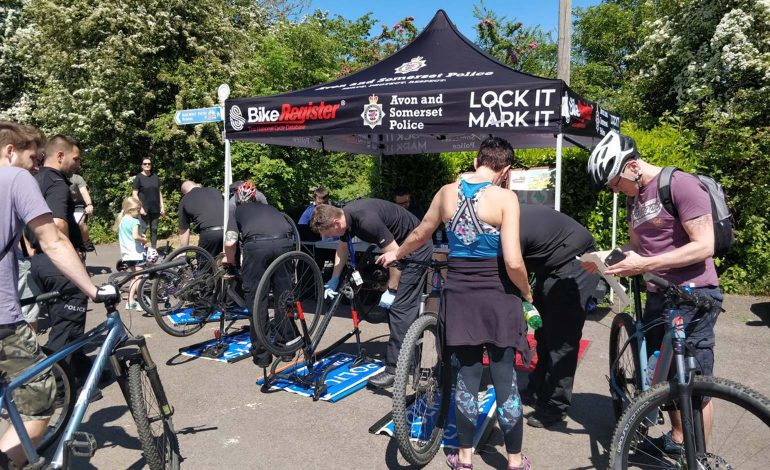 Working in partnership with BikeRegister, the event, between 10am and 3pm, is part of an ongoing police campaign to reduce the number of bicycle thefts across Avon and Somerset.

Officers will be on hand to help bicycle owners register their bikes on the BikeRegister database and discreetly security mark their bikes.

The BikeRegister database is used by every police force in the UK and enables officers to quickly and easily identify the original owner of any stolen or recovered bicycles.

People who have their bike marked will also be given an exclusive discount voucher to purchase an approved D-lock.

Bicycle thefts account for 2% of all police recorded crime across England and Wales, and 50% of all bicycle owners have had a bike stolen.

Since the start of the BikeRegister scheme, there have been a number of recovered bikes being returned to their original owners.

These bike marking events are being supported by Operation Remedy as just one of a number of proactive initiatives being rolled out across Avon and Somerset to tackle residential burglary.

Detective Inspector Martyn Cannon of Operation Remedy and Force Lead for burglary, commented: “We take burglary very seriously and are continuing to work hard to reduce the number of burglaries across Avon and Somerset.

“We know bicycles are one of the most commonly stolen items and these events are a fantastic opportunity for local residents to go along and hear from officers about the latest burglary prevention advice whilst having their bikes marked and registered online for free.

“Bike marking not only acts as an excellent deterrent against thieves but also makes it much easier for police officers to identify the original owners and return their stolen bicycles.”

As part of the scheme, Avon and Somerset Police has provided the following crime prevention advice:

Over 50 bikes marked during successful crime prevention event in Bath