An 81-year-old farmer has been given a suspended sentence after admitting animal welfare charges, following the discovery of up to 80 cattle knee-deep in mud at his farm. 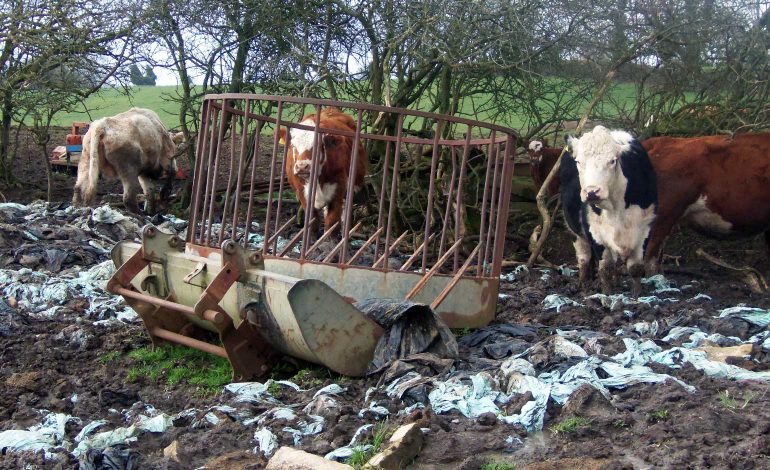 The cattle were discovered in the mud on the farmer’s land at Hinton Blewitt, with smaller animals competing with adult animals for small amounts of hay and drinking rainwater from puddles in fields full of rubble, scrap metal and plastic waste.

John Hasell, of Home Farm, appeared before Bath Magistrates on 5th September, where he pleaded guilty to six charges of animal welfare issues and one charge of allowing animal carcases to be accessed by birds and animals.

The court heard that Trading Standards animal health officers found the herd of 70 to 80 cattle being kept in fields that were deep in mud and contained large amounts of scrap metal, plastic and rubble.

Three calves were found entangled in the wire fencing, one of which was comatose and had to be put to sleep.

Other animals were left lame with no vet treatment and struggling to move in the mud.

Cattle that had died were left uncovered on the back of a truck for over a week before they were disposed of.

Hasell was told he must provide his cattle with sufficient food, water and suitable grazing but his animals were left competing against each other for small amounts of food and drinking rainwater from puddles.

The court heard that problems on the farm started in autumn 2018, and continued through until the summer of 2019 when Hasell sold his last remaining cattle.

Magistrates accepted that Hasell’s own health had deteriorated over the period and that he had been unable to look after the cattle but stated that he should not have ignored the professional advice provided and he should have made alternative arrangements for his animals.

Hasell was sentenced to 16 weeks custody, suspended for two years along with a 12-week curfew. The courts also disqualified Hasell from keeping or looking after livestock for an indefinite period and ordered he pay £10,000 towards prosecution costs.

“This is an especially upsetting case because our animal health officers worked hard to resolve the serious ongoing issues with the cattle’s welfare.

He added: “The situation on Hasell’s farm had become extremely challenging and as he was not taking steps to resolve the situation the council had little choice but to prosecute.”