A recent bike marking and crime prevention event in the centre of Bath has been hailed a success by Avon and Somerset Police, with over 50 bikes being marked during the day. 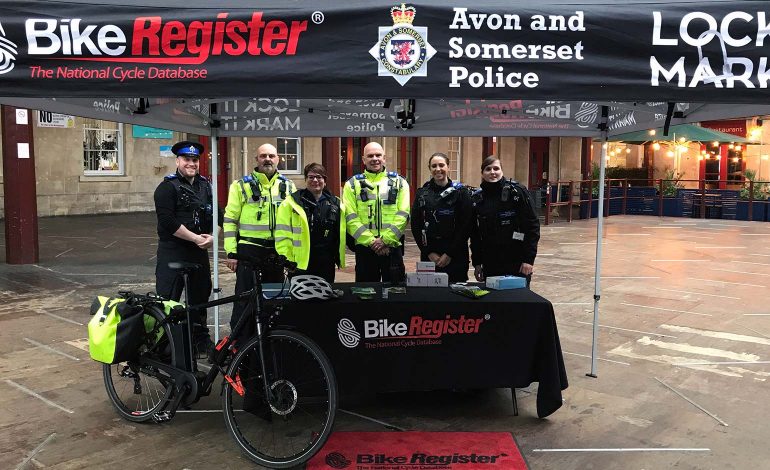 The event is one of a growing number of bike marking events being held across Avon and Somerset this year as part of ongoing efforts to reduce bicycle thefts.

It was held at Green Park Station on Friday 31st January and officers marked a total of 54 bikes and arranged a further 21 home visits with local residents who weren’t able to bring their bicycles to the event.

Members of the public who attended were able to have their bicycles registered on the BikeRegister database and get their bikes marked with a tamperproof sticker.

People who had their bikes marked were also given an exclusive discount voucher to purchase a Secure-by-Design-approved D-lock.

The BikeRegister database is used by every police force in the UK and enables officers to quickly and easily identify the original owner of any stolen or recovered bicycles.

Since the start of the BikeRegister scheme, Avon and Somerset Police have recovered and returned a number of bikes to their original owners as a result of their details being registered on the BikeRegister database.

At the event, residents also had the opportunity to speak with officers about the latest crime prevention advice and discuss any crime-related concerns.

PCSO Paul Childs commented: “It was great to meet so many bike owners and help them register and mark their bicycles.

“We take burglary very seriously and these free bike marking events are just one of a number of our proactive initiatives helping tackle burglary.

“We are committed to identifying, apprehending and bringing burglars to justice. These events provide us with a great opportunity to share crime prevention advice with members of the public and remind them of ways in which they can make it harder for criminals by securely storing their bicycles and belongings.

“We will be holding more bike marking events in and around Bath in the coming months so I encourage members of the public to regularly check our website for the latest dates and locations.”

Bicycle thefts account for 2% of all police recorded crime across England and Wales, and 50% of all bicycle owners have had a bike stolen.

With over 4,000 bikes marked in the past year, Avon and Somerset Police is the most proactive police force in the country using the BikeRegister scheme.

Bike marking events are being supported by Operation Remedy as just one of a number of proactive initiatives being rolled out across Avon and Somerset to tackle residential burglary.