Bath Abbey has been delighted to throw open its doors to its’ neighbouring buskers and welcome them in to perform and entertain visitors to the Abbey’s “Streets of Bath” exhibition this week. 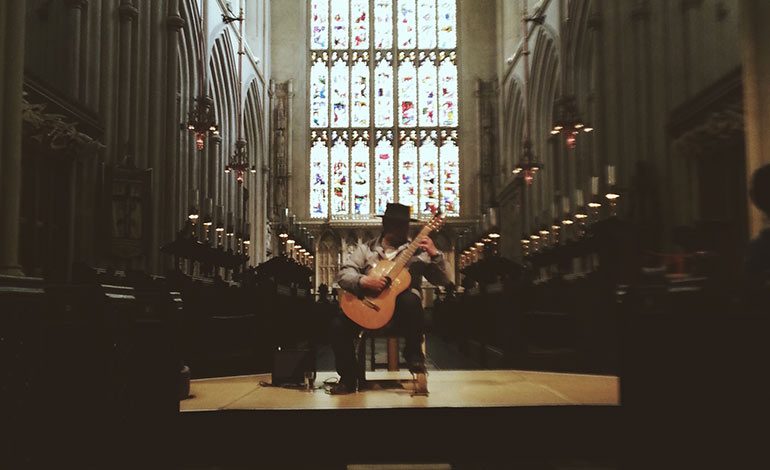 It’s a sign of the new relationship that has developed between the Abbey and local buskers since the dispute two years ago.

This has included working with partners, including Bath and North East Somerset Council, Bath Business Improvement District, Keep Streets Live and the Musicians Union, to produce a “Buskers’ Guide to Bath”.

The guidelines aim to balance the rights of street musicians to earn their living with the rights of members of and visitors to the Abbey as a place of worship and quiet rest, so that all can enjoy the city and their time within it.

The Abbey has printed over 500 copies of the new guide for circulation to its neighbouring businesses, as well as having copies on hand for Abbey volunteers and members of the busking community.

Along with the new traffic light system in place that lets performers know when services and rehearsals are taking place in the Abbey, it’s lead to a new spirit of cooperation, which the Abbey is keen to develop, through initiatives such as the performances this week.

Every day during the Abbey’s “Streets of Bath” exhibition will see a performer give a recital at 12.30pm.

Included are guitarists, singers and a soprano, reflecting the diversity of music usually available right next door in Abbey Churchyard and Kingston Parade.

Their performances complement the artworks being exhibited in the Abbey this week; these include sculpture, the spoken word and poetry, all alongside more traditional paintings and photography.

The aim of the exhibition is to help visitors gain an insight into how our streets live and work and to give thought and consideration to those we often take for granted.

Revd Stephen Girling, Missioner of Bath Abbey, said: “The busker’s music played at the heart of the Abbey sounded magnificent in this unique acoustic.

“We truly value our partnership with others in this city, including visual and performing artists, I hope we can continue to build upon these latest steps.”