Five hundred and fifty walkers took part in the seventh annual Bath Rugby Walk on Saturday 23rd February, taking on an eight-mile route along the Kennet and Avon canal path. 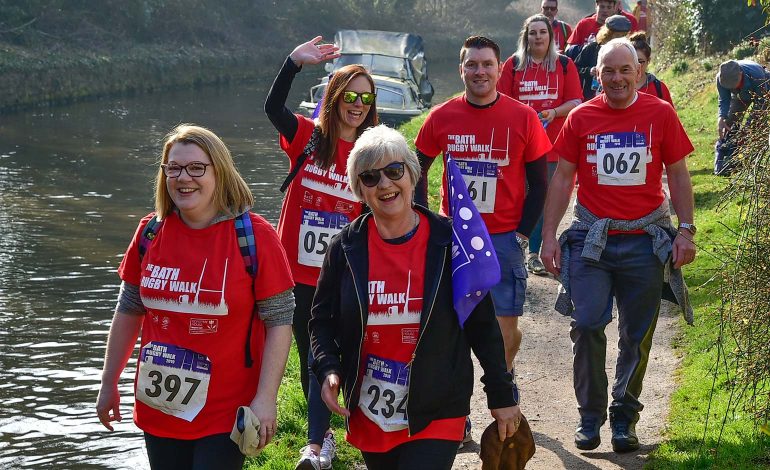 For the first time, the walk was open to women as well as men and children, and raised vital funds for two local charities Bath Rugby Foundation and Dorothy House Hospice Care.

Sponsored by Thrings, the Bath Rugby Walk along the Kennet and Avon canal path started from Dorothy House in Winsley with hot food provided by the Rotary Club of Devizes.

The walk finished at the home of Bath Rugby, The Rec, after a short stop for refreshments along the canal path provided by the team at Field Good Bar who donated £1 for every pint to the charities. 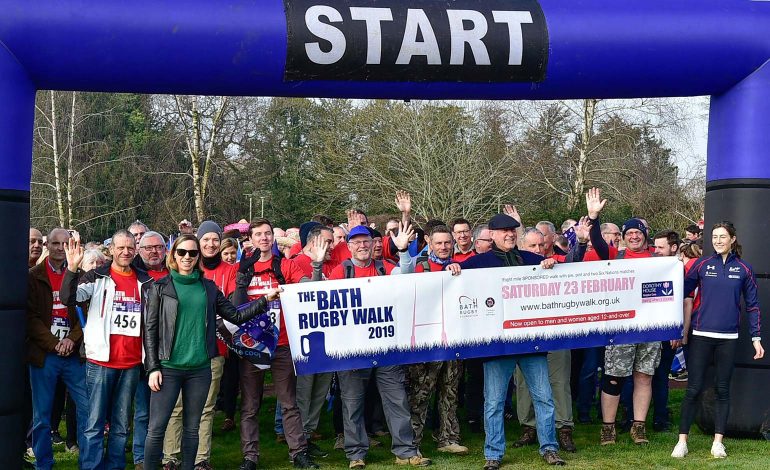 At the Rec, walkers were treated to a free pie and a drink and watched two Six Nations matches where France beat Scotland 41-10 and Wales beat England 21-13.

Bath Rugby Foundation and Dorothy House Hospice Care raised over £56,000 last year This year, they hope to beat this figure to help support their much-needed work for the local community.

Sgt Keith Terry from the Gill’s Boys Team said: “Our team of soldiers walked in memory of Gill Down and helped to raise funds for charity by completing the annual Bath Rugby Walk twice.

“We serve in the British Army at 6 Battalion, the Royal Electrical & Mechanical Engineers in Tidworth.  The Walk normally consists of an 8 mile walk from Dorothy House in Winsley to the Bath Rugby Club at The Rec in Bath.

“However, in true Army fashion we added a twist and doubled the length of our walk to 16 miles each carrying a 20kg (45lb) pack starting at Bath Rugby Club at 7.30am, walking to Winsley to meet up with the rest of the Gill’s Boys team members and then walked back to The Rec to watch some excellent Six Nations rugby.”

Emily Knight, Event Fundraiser, Dorothy House Hospice Care said: “This year’s Walk was a great success with 550 people taking part in the sunshine. The funds raised for Dorothy House will help us provide patients and their families with specialist palliative and end of life care.

“We’re delighted that women joined in this great family day out for the first time this year and we hope more will get involved next year.

“Congratulations to the Mashy’s Marchers Team for being one of the largest teams this year with an incredible 45 walkers!”

Matthew Fothergill, Head of Key Stage 2 at Warminster School and organiser of the Mashy’s Marchers team said: “Stuart Morgan-Nash former Deputy Head at Warminster Prep School was one of life’s good guys, larger than life and loved by the thousands of children he taught over the years. Losing him to cancer in late 2018 left an enormous hole in the lives of all his family and friends.

“In Stuart’s honour, 45 members of the Mashy’s Marchers team took part in the Bath Rugby Walkfrom Dorothy House to the Bath Recreation ground where we raised a glass and enjoyed a pie in his memory.

“Stuart loved Bath Rugby and we all enjoyed getting together to remember Stuart and raise funds for charity.”

“I’m sure the glorious weather helped get everyone to the Rec on time for the Six Nations extravaganza.”