Taxi drivers in Bath have been praised after only two out of 25 vehicles that were recently checked by Avon & Somerset Police, Bath & North East Somerset Council and VOSA were found to have defects. 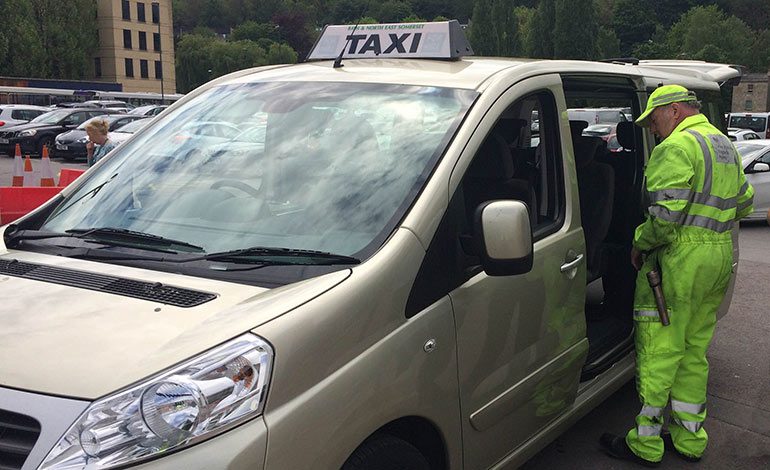 The surprise operation was aimed at checking the safety and suitability of licensed taxis within the City of Bath.

Licensed vehicles in the City were directed by the police into Avon Street car park, where they carried out checks on driving licences, MOTs and insurance.

Licensing Officers from Bath & North East Somerset Council checked vehicles and drivers for compliance with licensing laws and local conditions, and the vehicles were given a thorough mechanical inspection by a VOSA inspector for mechanical safety.

25 licensed vehicles were inspected during the operation and a very high compliance rate was recorded with only two vehicles being taken off the road for matters that needed immediate attention. Both vehicles were reinstated by the end of the same day.

The joint operation is being described as a success and a credit to the commitment and professionalism of the licensed taxi operators.

Cllr Martin Veal (Conservative, Bathavon North), Cabinet Member for Community Services, said: “The operation was carried out with the good natured co-operation of the drivers involved and this ensured a smooth and efficient operation with quick turnaround times for the busy drivers.

“The drivers were praised by the Police, VOSA and the Council for the good standards and it was great to see some of them presenting their vehicles for inspection voluntarily as they were confident of passing all checks with flying colours!

“We welcome the positive and prompt remedial action taken by the two taxi drivers on the day and that the Council continues to work closely with the taxi trade in Bath and North East Somerset to ensure that drivers are aware of their responsibilities to provide a safe service to the public.”