More than £400 has been raised for the Children’s Hospice South West charity thanks to a ‘wheely’ good effort from a local Co-operative store manager in Bath. 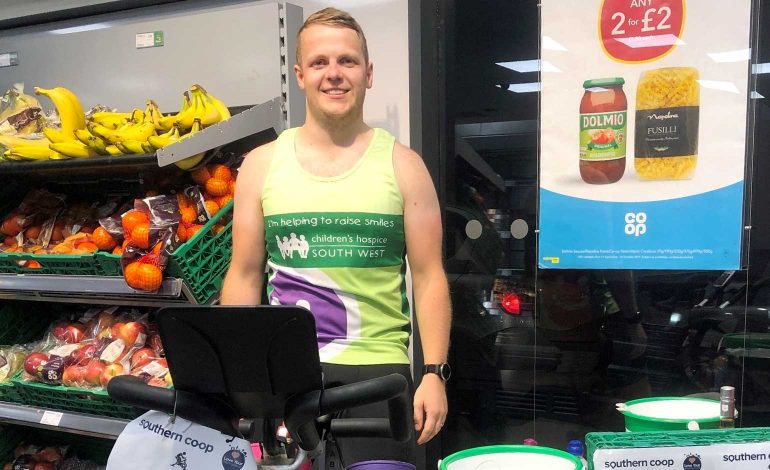 Ben Langford-Young cycled a total of 178 miles during an epic 12-hour challenge on a static bike at The Co-operative Food in Bath.

He took just 10 minutes break during his fundraising feat and raised £416 for the store’s charity partner – Children’s Hospice South West.

A further £291 was raised through a bake sale and charity pot donations.

Ben, Store Manager at the Bath store which is part of Southern Co-op, said: “I have only been cycling since February and use this as my main commute into work which is around 24 miles a day.

“We had a mini-competition between our sister stores in the area to see who could raise the most in a month so I decided to give the sponsored bike ride a go.

“The customers were amazing. Many of them were offering to buy me things like food and drink to keep me going!

“It was hard work but people told me that I didn’t stop smiling – even for the last mile.

“A big thank you to everyone who supported me and the hospice. The staff there do amazing things for our local children so it is great to be able to support them.”

The retail store in Widcombe Hill is supporting the hospice as part of Southern Co-op’s community engagement programme ‘Love Your Neighbourhood’, which aims to help with creating greener, healthier, safer and more inclusive neighbourhoods.