Visitors will be able to get their first glimpse of Dyrham Park’s restored Old Staircase this month, as the first phase of work on a £10 million site-wide project is finished. 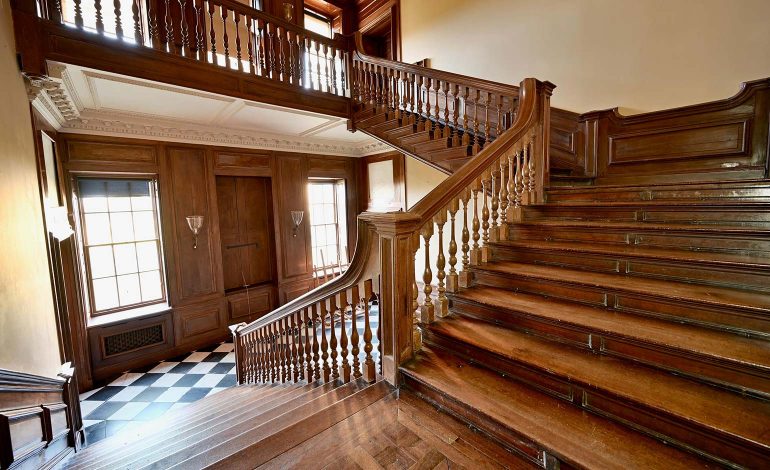 Work on the staircase signals the first major milestone to restore, revitalise and reimagine the National Trust site near Bath.

The project, called Dyrham Park Rework’d, aims to create an engaging and meaningful journey into the 17th century while giving people more space to eat, shop and play.

As well as being reinforced and made structurally sound so visitors can access the upstairs rooms again, the staircase has been redecorated and the wood ‘re-grained’ to take it back to how it would have looked in the 17th century.

Project Manager Tim Cambourne said: “The completion of this work is the first real project milestone and the results really are transformational; the staircase is vastly improved and it’s fantastic to see the staircase as it was originally intended.

“As well as looking great there’s no longer a weight restriction thanks to the structural works so we don’t have to limit the number of people on the staircase at a time anymore.”

The panels and bannisters had been painted over in the 1940s.

The white and gold paint scheme masked the original black walnut from North America, a gift to the house builder William Blathwayt, evidencing his specific role as Surveyor and Auditor- General of Plantation Revenues in Britain’s colonial history of the late 17th century.

Painstaking work to carefully remove the layers of white paint to reveal the original walnut and walnut veneer and re-grain the softwood elements took some six months to complete by a specialist team of seven people.

Wood graining is the practice of painting wood to look like a more expensive wood and a feather was used to spread the paint to create the effect of the wood grain.

Trials of different finishes were carried out on the walnut and different graining styles were tested on the softwood sections to make them match.

These were approved by the Trust’s historic paint adviser to ensure the right finish for the period.

The second is a 17th century ‘historic’ style used on the staircase soffit panels on the underside of the staircase and is more interpretive and expressive, celebrating the artistry of the decorator.

More re-graining will take place in the Great Hall later in the year and Dyrham Park will stay open throughout the project with opportunities to see conservation work up-close and be part of the restoration journey.

Tours are also running each weekday, volunteer numbers permitting, to find out about some of the work the teams do behind the scenes.

The work in the house has been so far funded by fundraising efforts and grants but just over £150,000 is still needed to pay for the remainder of the house conservation work.

Events are planned in 2020 to raise funds and people can support the project by buying raffle tickets, donating online or on-site through our tap-to-donate facility.

Work to bring hard paths through the parkland, improve car parking, update play facilities at Old Lodge, build a new tea-room and shop, add refreshment stations to Old Lodge and Visitor Reception as well as pressing ahead with the ongoing garden project are also all part of the larger Dyrham Park Rework’d Project.

Dyrham house is open daily from 11am-5pm with last entry at 4pm. It is situated just off junction 18 of the M4, 8 miles north of Bath.