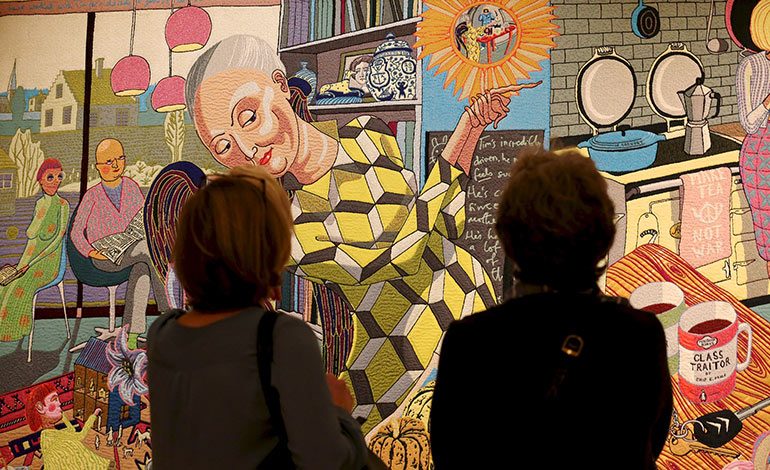 More than 49,000 people from all age groups visited Perry’s ‘The Vanity of Small Differences’ exhibition, which ran from 9th January to 10th April 2016.

On the busiest day (Easter Saturday) there were 1,600 visitors to the show.

There was also a sell-out talk by Perry at the Assembly Rooms on 7th April, attended by 500 people.

“We’re delighted that so many local residents and visitors to Bath had a chance to see these important and exciting works by one of the UK’s best-known artists.”

The exhibition featured a series of six large, exuberant tapestries exploring the British fascination with taste and class.

The tapestries were created for the BAFTA award-winning Channel 4 Series ‘All in the Best Possible Taste with Grayson Perry’, which follows Perry as he embarks ‘on a safari amongst the taste tribes of Britain’ to gain inspiration for his work.

Inspired by William Hogarth’s ‘A Rakes Progress’, the tapestries chart the ‘class journey’ made by young Tim Rakewell, and feature many of the characters, incidents and objects that Perry encountered on journeys through Sunderland, Tunbridge Wells and The Cotswolds for the TV series.

The Victoria Art Gallery was the first venue in the south of England to exhibit the tapestries – previously they had been displayed in London, the north of England and Istanbul.

Tickets to temporary exhibitions at the Gallery cost £4, with free admission for under-21s and local Discovery Card holders. Admission to the permanent collections is free for all.