Plans to regenerate Twerton Park, the home of Bath City Football Club, have been refused at a meeting of Bath & North East Somerset Council’s Planning Committee. 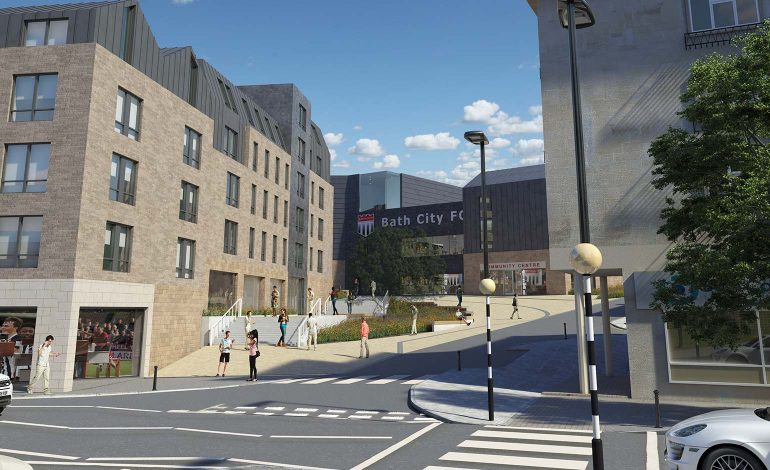 The decision was made during a meeting of the council’s planning committee this afternoon, Wednesday 11th March, in line with earlier recommendations by planning officers to refuse the application.

Plans were submitted last May to replace the grandstand and install a 3G pitch, alongside proposals to create 400 living spaces and upgrade Twerton’s High Street.

Concerns about the student accommodation were raised by planning officers, who said the scale of the seven-storey block was “excessive, visually intrusive and over-dominant”.

They said the development, “due to the poor outlook, quantity and quality of amenity spaces, room sizes and layouts”, would create a poor quality and “oppressive living environment” for future occupiers of the accommodation.

The redevelopment would have seen the demolition of the north spectator stand, replaced by a new stand with a capacity of 2,000 spectators.

Twerton councillor Sarah Moore had objected to the plans, saying she considered them to be “overdevelopment with insufficient space to provide adequate housing facilities for the numbers and types of properties proposed”.

The joint venture between Greenacre Captial and Bath City Football Club would have seen the club receive a payment of £1.55 million to clear its debts and all costs for the development, including the new facilities for the football club, borne by the investment company.

Over 800 letters were submitted in support of the plans, with claims the existing facilities are dilapidated, run-down, not fit for purpose and in need of investment.

Earlier this week, Bath MP Wera Hobhouse announced her support for the plans, saying: “The efforts over the last two years that have gone into providing an outstanding community facility for the people of Twerton and beyond has been exemplary, and I believe the community value to the city is very high.”

Councillors voted unanimously to accept the advice to refuse the application, with many saying the decision was difficult and that they would welcome a “better application” in the future.

“We have worked closely with Bath and North East Somerset Council throughout this process and have sought the advice and guidance of council officers in an attempt to propose a scheme which would protect the future of Bath City FC, help us to pay off our debts, bring benefits to the local community and see much-needed investment in Twerton High Street.

“Along with our partners, Greenacre Capital, we have proposed a project that would have dramatically enhanced the prospects of Twerton, introduced new affordable housing to the area and, in fact, delivered Purpose Built Student accommodation clearly in line with the Council’s own strategy.

“In addition it would have ensured the city had a high grade football club and stadium for current and future generations.

“Despite a groundswell of support, with large numbers of positive comments on the planning portal from the Bath community, Bath and North East Somerset Council has decided not to approve this once-in-a-generation opportunity for Twerton.

“Fans, players and staff can all rest assured that we will continue to act in the best interests of the Club and that there will be no drastic short-term changes although our focus will now be to Bath City FC to consider all options for its future.”