Councillors and residents in Peasedown St John are celebrating after a campaign to see street-lighting columns replaced in their village paid off. 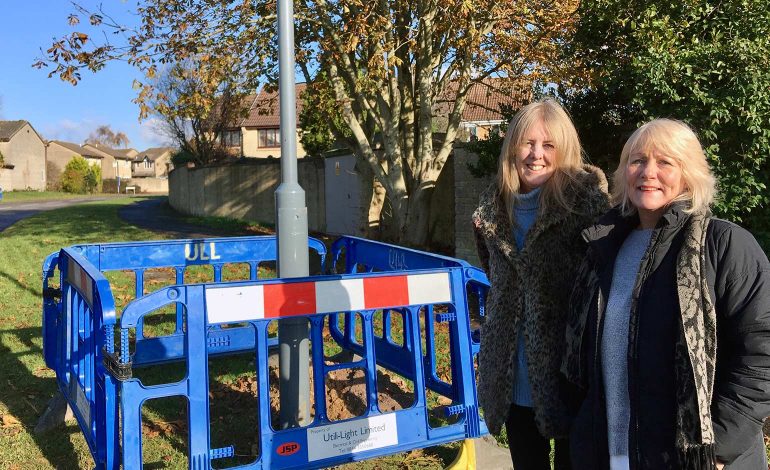 For over a year, local councillors Sarah Bevan and Karen Walker (Independents) lobbied the Highways Department at Bath & North East Somerset Council with concerns about the quality and safety of old streetlight columns.

Cllr Sarah Bevan said: “We identified a number of streets in Peasedown St John where the columns needed replacing. Several decades of regular use leads to wear and tear, so it’s been a priority of ours to have them replaced.

“Making repairs to street lighting isn’t a straightforward issue to address though in Peasedown St John. Some streetlights are owned by B&NES, some by the Parish Council, and some by Curo.

“As B&NES Councillors, Cllr Walker and I have been able to ensure those owned by B&NES Council are kept to a good, useable standard.”

The 43 columns replaced by B&NES were in Orchard Way, Adams Close and Pippin Close. The £41,000 was allocated in the 2019/20 council budget, following requests made by the councillors.

Cllr Karen Walker added: “Thanks to all the pedestrians and drivers for their patience over the last three months while the replacement works were carried out.

“The new columns look fantastic and will be put to good use for the next 20 years, at least!

“Each year, Cllr Bevan and I make a series of requests to the council’s leadership on behalf our residents for funding allocations for Peasedown.

“We’ll be making a new series of requests at February’s budget meeting.”