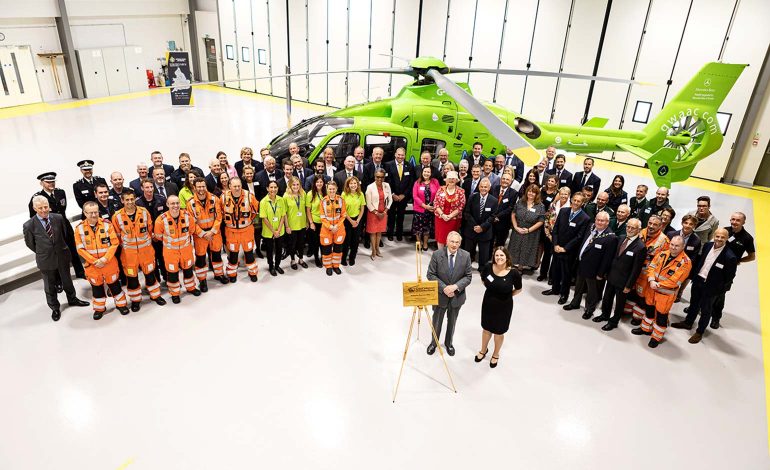 Moving into the new site was a huge milestone for the life-saving charity, which celebrated its 10th birthday last year.

GWAAC’s Critical Care Team moved into their new home in October 2018, after a successful appeal raised the £1.3 million needed to purchase the site and secure the future of the charity’s operations.

During his visit on 25th September, His Royal Highness met a range of people who all made last year’s purchase possible, from charity staff and operational crew to supporters, trustees, patrons and volunteers.

Amongst some of the 80 guests were also members of the South Western Ambulance Service Foundation Trust (SWASFT) and Babcock Mission Critical Services, who provide the charity’s helicopter, Helimed 65.

The Duke was given a tour of the new facilities, which culminated in the hangar, where he unveiled a commemorative plaque to mark the official opening and met a former patient of GWAAC, Ali Layard and the Specialist Paramedic who attended to him, Pete Sadler.

The Duke gave a speech to guests after unveiling the plaque, saying: “It’s great to see such a splendid building which has all the equipment you need to do such an important job. 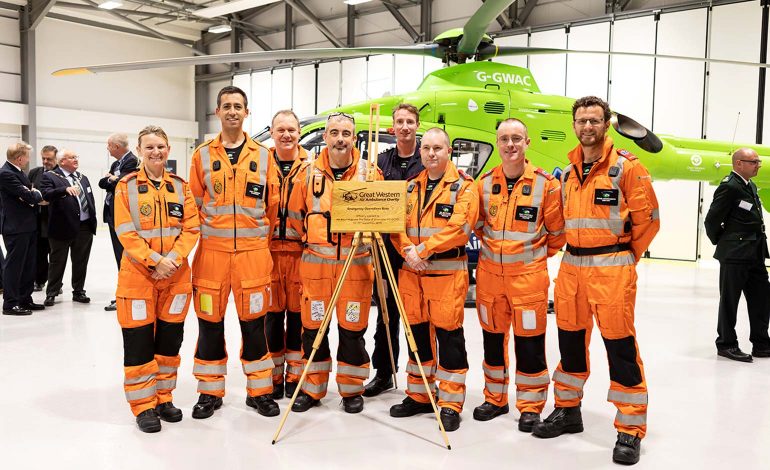 “It’s clear to see how passionate everyone here is about the charity and all the important work that it does.”

Chief Executive, Anna Perry, said: “We were delighted to welcome His Royal Highness The Duke of Gloucester to the base today for the official opening – the event was the perfect opportunity to get everyone who helped make this possible together and celebrate the hard work that has gone in to this move over the last year, allowing us to keep providing our life-saving service to those who need it the most.

“Without everyone here today, this would not be possible and we were honoured to show His Royal Highness the incredible work that we do here at Great Western Air Ambulance Charity.”

Also in attendance on the day were representatives from the National Police Air Service (NPAS), who lease half of the base for their operations.

Almondsbury is one of 14 National Police Air Service bases. The network provides borderless air support to police forces across England and Wales 24/7, 365 days a year, flying to around 20,000 tasks annually. Air crews and a single NPAS helicopter operate from Almondsbury – in the first year at the base, crews have flown to more than 1,200 tasks.

Chief Superintendent Scott Bisset, Chief Operating Officer of NPAS, said: “The base at Almondsbury provides NPAS with an excellent facility and we’re grateful to GWAAC for allowing us to share their building.

“Our crews fly from here supporting police forces across the South West and beyond on tasks such as searching for suspects and missing people, vehicle pursuits and the policing of major disturbances and events.

“We’re delighted to have welcomed His Royal Highness and guests as part of the opening event.”

Chair of the national NPAS Strategic Board Mark Burns-Williamson OBE, Police and Crime Commissioner (PCC) for West Yorkshire added: “I’m delighted to be attending the official opening event at Almondsbury to see this excellent shared facility with His Royal Highness, GWAAC, NPAS and other guests.”