A man from Radstock near Bath has raised over £300 for the Great Western Air Ambulance Charity after walking over 1000 miles with his two dogs, Ruby and Lily. 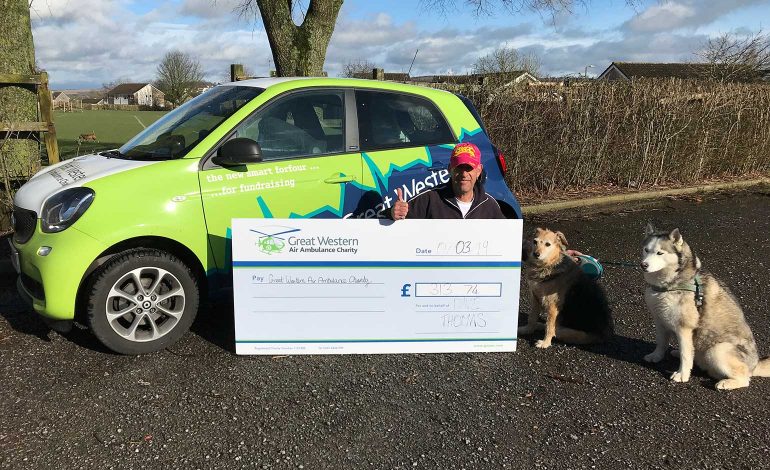 Dave Thomas with his two dogs, Ruby and Lily

Dave Thomas set himself the challenge of walking 700 miles in a calendar year, with his two dogs at his side.

The trio, who were also raising money for Guide Dogs for the Blind, ended up smashing their target, walking over 1,435 miles and raising £313.74 for the Great Western Air Ambulance Charity.

“I’m staggered that GWAAC isn’t government funded and as this service is vital to many people it only makes sense to help you guys out. Hopefully I’ll never need you!”

GWAAC has been providing the critical care and air ambulance service to 2.1 million people across Bath and North East Somerset, North Somerset, Bristol, Gloucestershire, South Gloucestershire and surrounding areas for over 10 years.

The charity relies solely on the generosity and support from people like Dave in the local community to raise over £3 million a year needed to stay operational, and receive no day-to-day funding from the Government.

“Dave is a wonderful example of a community-spirited individual who had a great fundraising idea and made it happen!

“We are so grateful to him for supporting Great Western Air Ambulance Charity and helping to save local lives all across Bath and North East Somerset.”