Members of the public are being given the chance to see building conservation in May, as conservators clean and repair the decorative arch over York Street in Bath. 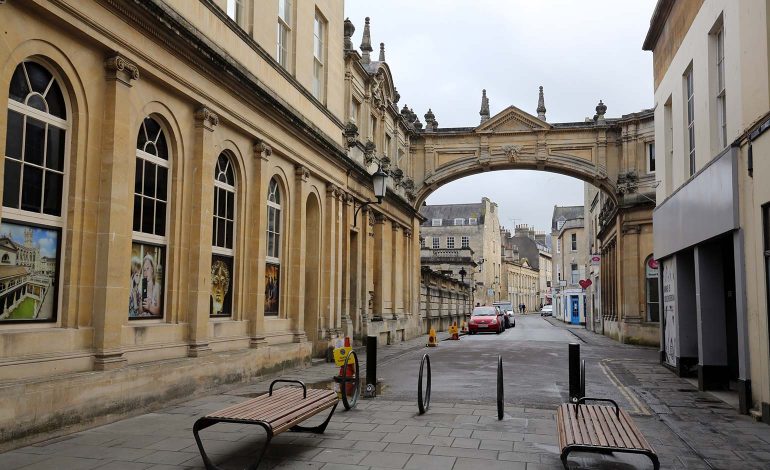 The conservators, from Cliveden Conservation, will give daily talks to the public about the work they are carrying out.

The free 10-minute talks will take place underneath the arch at 11am and 3pm each weekday, from 7th May for the duration of the work, expected to be a few weeks.

The arch was built in c.1889 by city architect Major Charles Davis to carry water to a new Spa.

Hot water was pumped from the King’s Spring to a boiler house in Swallow Street via cast iron pipes in a tunnel below the road.

It then flowed back to the new Victorian spa facilities through a pipe hidden inside the arch over the street.

Now the arch, which is a distinctive Bath landmark, is being restored as part of the National Lottery funded Archway Project, which will see a Roman Baths Clore Learning Centre and a new World Heritage Centre open in the former City Laundry buildings in 2020.

The project will also open up new areas of the Roman Baths to visitors, including a Roman laconicum and a Roman exercise courtyard, under York Street and immediately below the arch.

The conservation work will include:

“We hope that passers-by will enjoy watching the conservators in action and listening to the free talks.”

Berenice Humphreys, Senior Projects Manager at Cliveden Conservation, added: “It’s great to be working in the city of Bath for the Roman Baths, for once above ground, on this important piece of architecture.

“Our works to clean and conserve the arch are a small part of what the Archway Project aims to achieve with its wider learning and heritage objectives.

“It’s a privilege to be involved with the project and the ‘conservation in action’ initiative. We look forward to talking to the public about our work.”