The Roman Baths and Pump Room has won three Gold awards at the Bristol, Bath and Somerset Tourism Awards, including Large Visitor Attraction of the Year and Accessible and Inclusive Tourism. 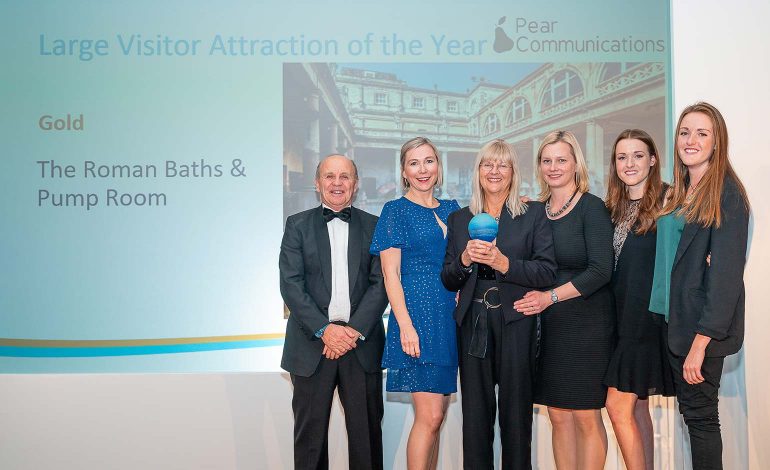 The awards were announced on Thursday 21st November by Laura Rawlings from BBC Bristol at a prestigious dinner at the Bristol Marriott Hotel City Centre.

Stephen Clews, Roman Baths and Pump Room Manager, said: “We are delighted to have won these five awards.

“Each year the Roman Baths welcomes more than 1.3 million visitors, and about 60,000 people attend events at the Pump Room and Assembly Rooms.

“It’s fantastic to know that we are providing an award-winning experience for all of our visitors and guests.”

Forty percent of visitors to the Roman Baths come from overseas, with the two largest overseas markets being the USA and China.

Audioguides are available in 12 different languages, as well as information sheets in more than 30 additional languages. The Roman Baths also has a dedicated Chinese website.

Every effort is made to ensure that the Roman Baths is as accessible as possible to visitors with disabilities.

Ninety percent of the historic building is accessible to wheelchair users, and visitors with hearing or visual impairments can enjoy the site using the British Sign Language or fully descriptive audio tour and tactile models. Information is also provided for visitors with autism and potential claustrophobia.

In 2020, a fully accessible Roman Baths Clore Learning Centre is set to open in former spa buildings next to the Roman Baths, along with a hands-on Investigation Zone set among Roman remains.

New areas of the Roman Baths will also be opened up to visitors, including a Roman exercise yard and a laconicum (a type of sauna).

The Roman Baths and Pump Room and the Assembly Rooms play host to an increasing number of conferences, weddings and private parties.

Eligible winners from the Bristol, Bath and Somerset Tourism Awards will be entered into corresponding categories of the South West Tourism Awards, which will be announced on Thursday 6th February 2020 at Exeter Cathedral.

Winners from the South West awards will then be selected to represent the region in the national VisitEngland Awards, which will be announced in June 2020.