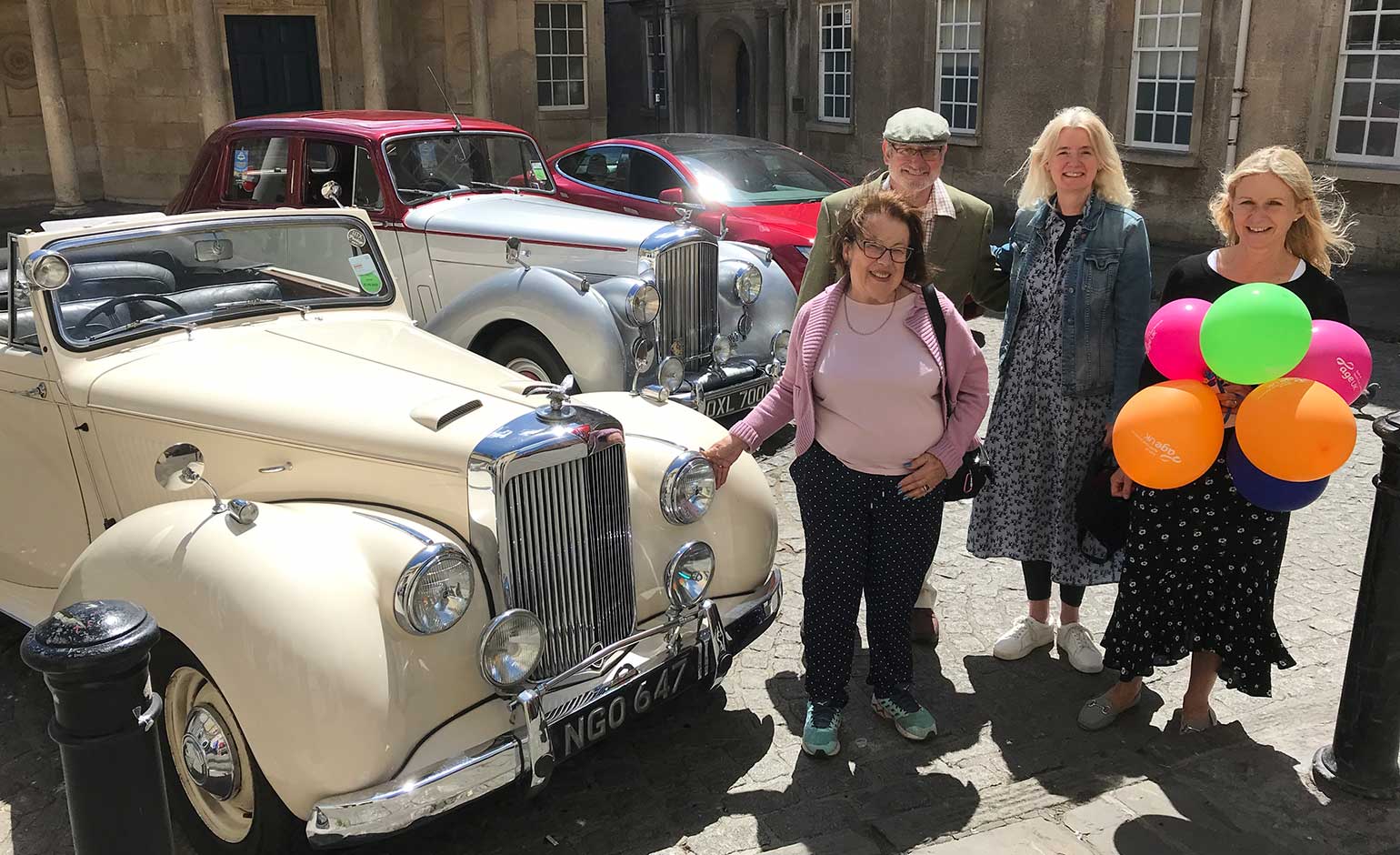 The vehicles were part of a visit to St Michael’s Place in the centre of the city.

The cars, a 1952 Alvis coupe, 1954 Bentley saloon, and a 2021 all-electric Tesla, belong to members of the Rotary Club of Bath, the organisers of the classic car show which is being held in Lansdown on 18th and 19th June.

The Rotarians hosted several members from the local Age UK’s lunchtime clubs, which meet every lunchtime at the organisation’s centre, next to the Little Theatre cinema.

Community Connections manager for Age UK Bath & NE Somerset, Sarah Talbot, came up with the idea of organising a visit after seeing publicity for the motoring festival, and thought people would find seeing the vehicles stimulating and fun.

She said: “We were so pleased to welcome the Rotarians and their vehicles.  Those attending our lunchtime sessions were thrilled to be able to see these special motorcars up close.

“It is often difficult for our club members to go on trips to events so we are always on the lookout for ways to bring a little bit of what they might be missing to them.

“To have three very special cars, gleaming in the sunshine, a few steps outside the club door was fantastic.”

The Alvis Coupe was built in the same year as the Queen was crowned, 1952. Club member Rob sat in the front seat and was surprised by the steering wheel.

He said: “It is so much bigger than on modern cars, it feels like a piece of bamboo!”

Hett, a regular club attendee, was thrilled to see the 1954 Bentley, saying: “It’s just like the one my daughter got married in.

“I must send her a photo. Look at how comfortable it is in the back seat. There is even a little drop down table to put drinks on.”

The Tesla electric car also provoked a lot of interest, as many people had not been in one before.

“I hope that we can repeat the exercise next year,” said Sarah. “It really was a great success.”

The Bath Festival of Motoring takes place this weekend at Walcot Rugby Ground, opposite the Lansdown Park and Ride.

Over 350 vehicles will be on display each day, including classic cars and motorbikes, and some of the latest luxury sports cars.

Tickets are available at www.bathfestivalofmotoring.com, and all proceeds go to local charities Dorothy House and Nova Sports.