An ongoing exhibition at the Fashion Museum in Bath, which features the outfits of royal women, has led to the exciting discovery of a missing dress worn by Queen Alexandra. 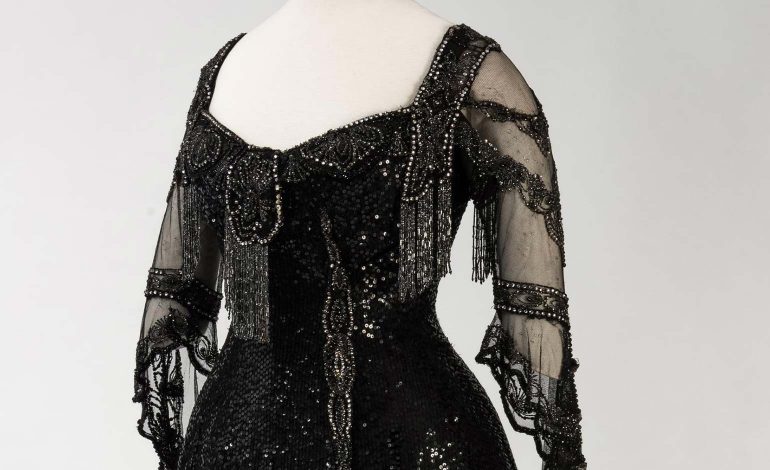 The black silk and velvet evening gown worn by Alexandra, the Danish-born wife of King Edward VII, lay hidden away in a private collection until earlier this year and is to go on show as a stunning new addition to the Royal Women exhibition.

The dress is a black silk and velvet evening gown embellished with beads and sequins and dates to around 1908-1910.

It was designed for Queen Alexandra by Parisian-styled London dressmaker Barolet of Knightsbridge and has Alexandra’s signature black and gold name tag sewn into the waist tape.

The Fashion Museum discovered the existence of the dress when its owner, Francesca Counsell Risius, got in touch after reading about the Royal Women exhibition.

It is understood Francesca’s great aunt, Mrs Counsell, bought the dress in the 1950s and kept it at her dress shop in Tunbridge Wells as a showpiece and royal curiosity.

A prized possession and never for sale, it was once worn by shop assistant Gilly Holiday for a story in the local paper in 1965. Gilly can be seen modelling the dress under a portrait of Queen Elizabeth II.

Mrs Counsell subsequently passed the dress to her great niece who carefully stored it in a box in her attic.

It remained hidden away until Francesca saw there was an exhibition opening at the Fashion Museum featuring dresses worn by Queen Alexandra.

“My great aunt gave me the dress in the late 1960s and I’ve kept it in a box ever since. I’ve carefully tried it on a couple of times, so has my daughter and occasionally we’ve taken it out of its tissue paper to show interested friends and family,” she said.

“I can’t wait to see it on display alongside other pieces from Queen Alexandra’s wardrobe.”

Dr Kate Strasdin, dress historian and one of the leading experts on Queen Alexandra, has examined the dress and verified its authenticity.

The size, style and signature waistband are near identical to other known items worn by Queen Alexandra, and Dr Strasdin’s research into the Royal Wardrobe accounts held in the Royal Archives at Windsor Castle confirm that Alexandra was indeed a client of Barolet around the time the dress was designed.

Dr Strasdin, who acted as historical consultant to the Fashion Museum during the development of Royal Women, is delighted a new dress worn by Queen Alexandra has come to light.

She said: “Queen Alexandra was a style icon and this dress is a fabulous find, not just because of its beauty, but because of what the dress reveals about Alexandra’s fashion choices.

“Placing orders with smaller, less well-known dressmakers such as Barolet as opposed to always favouring big couture houses like Worth shows a measure of Alexandra’s determination to dress apart from her peers and indicates a degree of sartorial independence.”

Interestingly, the dress has a prior connection to the Fashion Museum, previously known as the Museum of Costume.

Founder Doris Langley Moore borrowed the dress from Mrs Counsell to display in the very first Fashion Museum exhibition at Eridge Castle in Kent in 1955.

Elly Summers, Curator of Royal Women, said: “We are thrilled to have rediscovered this spectacular dress and to be putting it on public display this autumn.

“It was on show at Eridge Castle alongside another dress on display in Royal Women, a 1954 oyster silk satin ball gown by Norman Hartnell worn by Queen Elizabeth The Queen Mother, and it’s wonderful that they are sharing an exhibition space once again.

“It feels full circle to reunite it with the many other treasures collected by Doris Langley Moore that form the basis of the Fashion Museum collection.”

Following Queen Alexandra’s death in 1925, many of her dresses were dispersed and even today the whereabouts of many remains a mystery.

The evening gown is just one of the missing pieces from Alexandra’s wardrobe that have been uncovered over the years and feature in the Royal Women exhibition.

An 1870 tartan silk dress was discovered at a high end vintage shop in London called Baroque in the 1960s before it made its way into the Fashion Museum collection.

The black silk and velvet evening gown will also become a treasured part of the Museum collection, thanks to its generous donation by Francesca Counsell Risius.

The dress will appear on display in Royal Women alongside other known items worn by Queen Alexandra including a croquet jacket from 1863 and coronation glove from 1902, as well as royal fashions worn by Queen Mary, Queen Elizabeth The Queen Mother, and Princess Margaret.

Councillor Paul Myers, cabinet member for Economic and Community Regeneration, said: “We are very excited that, thanks to Francesca Counsell Risius’s generosity, this missing piece of fashion history is coming to the Fashion Museum, where local residents will be able to see it for free with a Discovery Card.

“We hope it will attract visitors from all over the country to the world-class Royal Women exhibition.”