It’s been discovered that surveyors at B&NES Council were aware of the gap beneath safety railings on the pool viewing gallery at Bath Sports & Leisure Centre months before the pool was reopened. 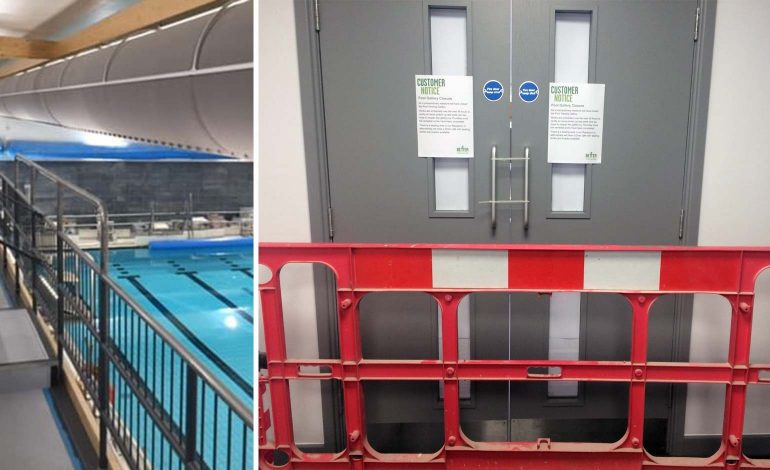 A Freedom of Information request by the Bath Echo has revealed that surveyors at Bath & North East Somerset Council had noted the gap beneath safety railings at the Bath Sports & Leisure Centre swimming pool viewing gallery as early as May 2018, four months before the issue was publicly brought to light, but were misled by contractors who told them that the gap had always been there.

Building regulations mean contractors have no obligation to upgrade buildings to current standards, but any work should be completed on a ‘no worse’ basis.

An email from a surveyor at B&NES Council revealed that the size of the gap beneath the railings was identified during a site visit on Thursday 3rd May 2018.

When questioned by the surveyor, a contractor is alleged to have said the gap above the toe guard already existed, meaning it was not subject to current building regulations when the gallery was refurbished.

The documents go on to reveal that the toe guard had been incorrectly replaced during the refurbishment work. 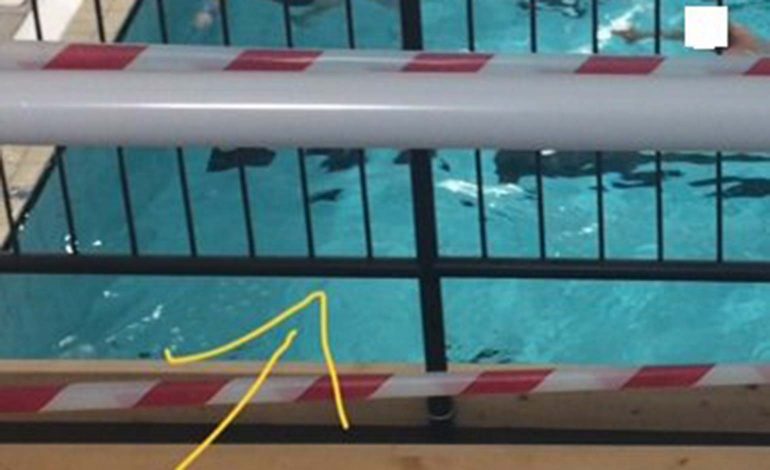 Panels were removed that already met current regulations, believed to create only a 100mm gap, and replaced with smaller boards that increased the gap to more than 200mm.

This was not picked up at the time as the surveyor had no reason to question the contractor, and regulations require the building to be ‘no worse’ than before.

Local resident Caroline Ambrose noticed the large gap at the bottom of railings in place at the bottom of the pool gallery’s seating area when watching her children during a swimming lesson at the centre on Wednesday 8th August, two and a half weeks after the swimming pool was reopened.

Over the next five days, Ms Ambrose documented her attempts to get the pool gallery closed on Twitter, explaining how she had contacted B&NES Council, GLL and Public Protection to help solve the problem.

The Freedom of Information documents also appear to reveal the reason behind the delay in closing the swimming pool gallery to the public, after the safety issue was brought to light. 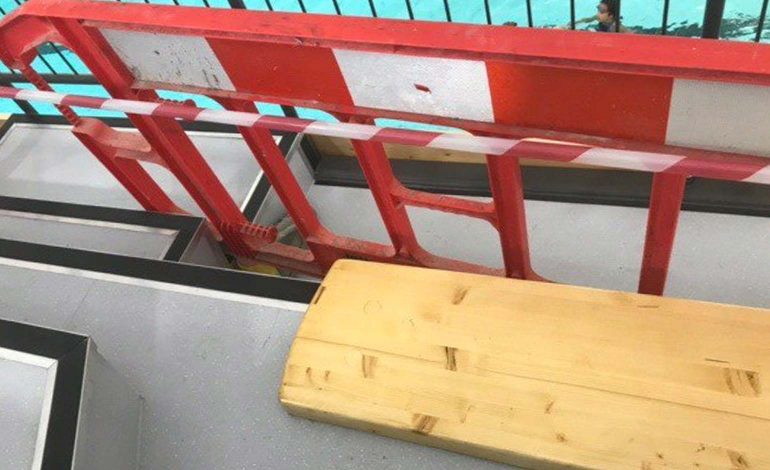 An email from a member of staff at Bath & North East Somerset Council that appears to thank staff at Bath Sports & Leisure Centre for responding to an earlier email was instead interpreted as approval for the use of tape and barriers at the front of the viewing gallery as a way of temporarily making the area safe.

The viewing gallery remained open to the public for five days after Ms Ambrose raised the size of the gap to staff.

Council papers also show that an ‘Independent Certifier’, employed by B&NES Council and GLL, did not pick up on the issue during their own inspection.

At a B&NES Council Cabinet meeting on Wednesday 5th September, Councillor Richard Samuel, who previously called for a review of work undertaken at Bath Sports & Leisure Centre, asked: ‘Who was responsible for carrying out safety inspections at Bath Leisure Centre before the swimming pool was re-opened to the public and what was the Council’s role?’

In response to Councillor Samuel’s question, Councillor Bob Goodman, the Cabinet Member for Development and Neighbourhoods, said: “Under the terms of their contract GLL are responsible for the safe management, operation and maintenance of the buildings and for the design, management and operation and maintenance of the refurbishment works to the facilities.

“The swimming pool refurbishment works were in phase 3 of the overall scheme and it was re-opened in July 2018. The building regulations allow for a local authority to consent to a building being occupied before building works are fully completed providing that fire safety requirements are satisfied.

“This is normal with larger schemes as they near completion and was the case with the various phases of the leisure centre.

“This means that the building refurbishment works on the leisure centre have not yet been fully completed in terms of building regulations.

“When an existing building is refurbished building regulations will generally apply only to new building work. They cannot be retrospectively applied to existing parts of the building which might not conform to current standards.

“As an added layer of protection the Council and GLL employed an Independent Certifier to verify that the works had been carried out to the required standards.

“The Independent Certifier performed an occupation inspection before the building was opened to the public and while noting a number of issues that needed to be dealt with, the railings located within the viewing gallery, of which there has been significant media coverage, were not picked up as an issue by this inspection.

“Once this matter was raised the Council advised GLL and the viewing gallery remains closed while the railing design is altered to resolve the issue. 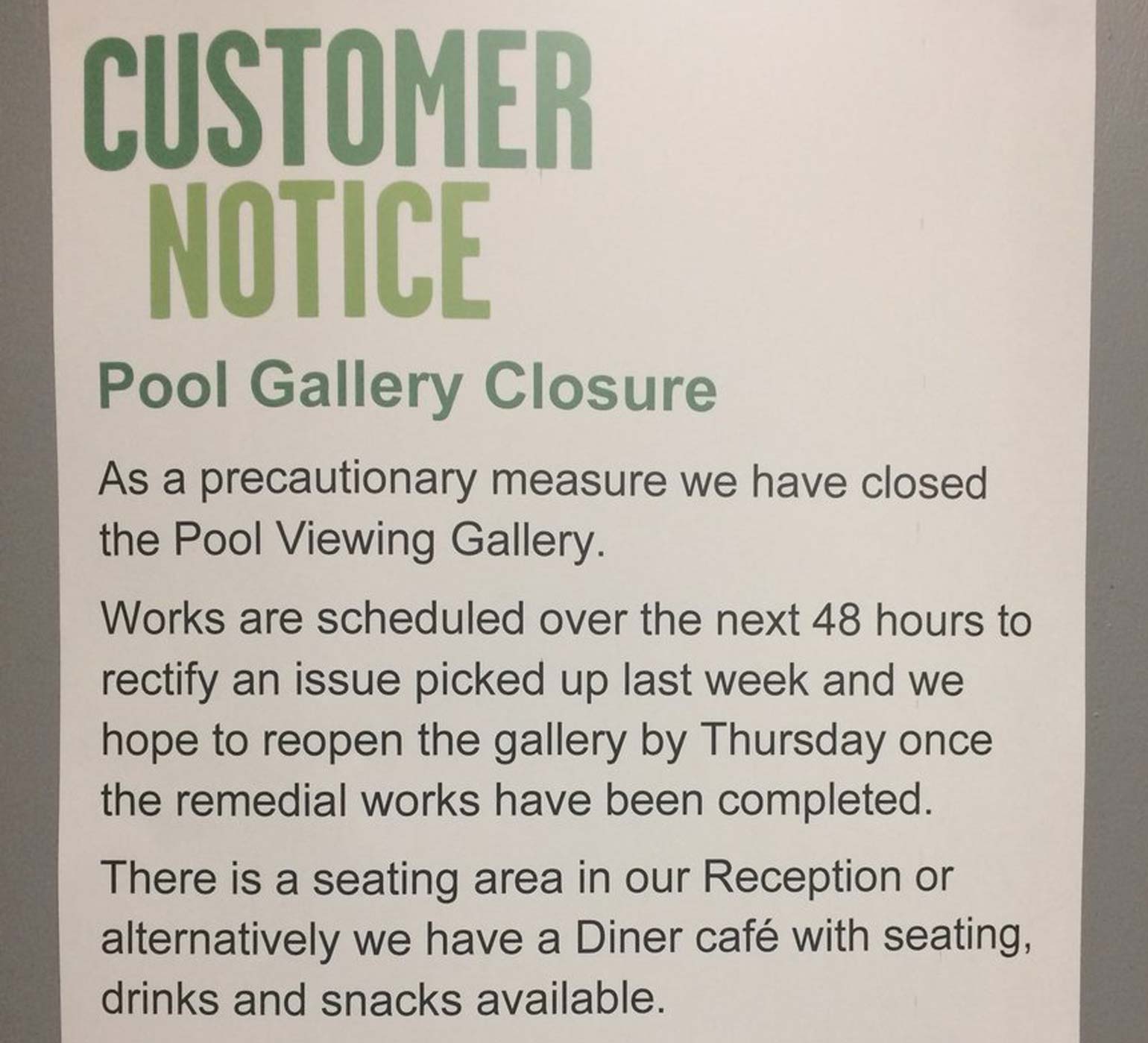 The pool gallery has now been closed for over a month

A spokesperson for GLL said: “Both GLL and Bath & North East Somerset Council take safety extremely seriously which is why the gallery remains closed until all remedial work has been carried out.

“The problem arose when GLL’s appointed contractor removed the toe guard from the bottom of the railings as part of the work they were carrying out. This was replaced with a smaller guard and the gap was highlighted by a member of the public.

“Notices went up informing the public of partial closure on entry to the gallery and barriers and tape were used to mark the closure.

“It was noted that the existing cross bar on the railings could be climbed up and so the balcony was completely closed to the public for remedial works.

When asked what action has been taken, and when the pool viewing gallery would reopen, GLL told us: “The toe guard has now been replaced. To address the cross bar issue a guard needs to be placed over the bar and solutions are being investigated.

“Once this work has been completed we will be in a position to give a re-opening date for the gallery.”

We asked for a statement from Bath & North East Somerset Council, but were told they did not have anything to add to the one provided by GLL.

Caroline Ambrose, who originally noticed the gap back in August, said: “I’m floored to learn Bath&NES had known since May and did nothing about it.

“This is a very basic building safety rule in a place where babies crawl and toddlers play while their siblings learn to swim. This shocking new information suggests the council is trying to cover up the facts and needs to stop trying to block an inquiry.

“The leadership needs to take responsibility, start telling the whole truth and take proper action before any more lives are put at risk.”