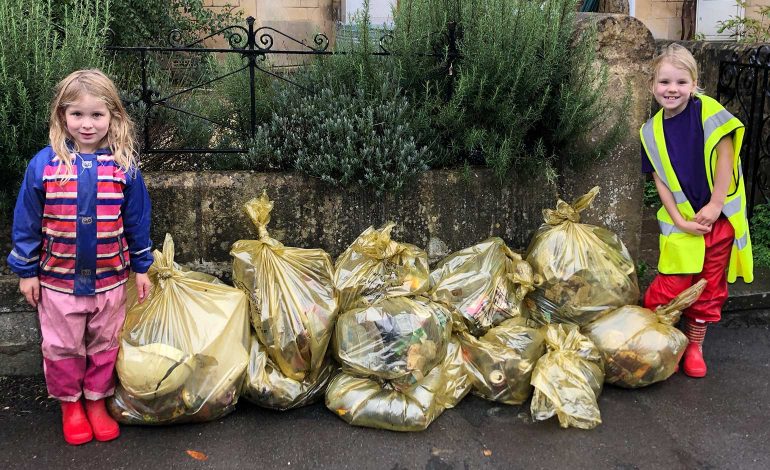 The litter collected in Newbridge

More than 170 volunteers removed over 100 sacks of litter and plastic pollution from their communities during the week-long clean-up campaign from 19th – 27th October, coordinated by Bath & North East Somerset Council and supported by the community group No Place for Litter.

Mandy Bishop, Director of Environment at Bath & North East Somerset Council, said: “We had a great response and I want to thank all our volunteers who generously gave up their time to make a difference to their community.

“From those who took part in one of the numerous organised litter-pick events across the district to the individuals who collected rubbish in their own neighbourhood, every bit of litter they collected has made a difference to the environment.

“Litter is not only an eyesore, it also harms the environment by polluting soil and watercourses, stunting plant growth and harming animals.

“We can all do our bit by not dropping litter and disposing of our waste responsibly, taking pride in our surroundings and protecting the environment.”

From cigarette butts, that take more than a decade to biodegrade, to crisp packets and drink bottles, the volunteers spent more than 200 hours picking up litter during the community clean-up.

Ellie Giles from Newbridge was among those who took part.  She said: “The litter pick went well despite the rain! It was my daughter Sophie’s idea to do the litter pick so we organised it.

“We had a few local families come along and it was great to see lots of children involved. We collected 12 bags of rubbish.

“We hope to make it a regular event in Newbridge as there was a lot of positive feedback from the community.”

The voluntary group No Place for Litter provided support to litter pickers.

“It’s lovely to know the message is getting through which, over time, can only spread to everyone. Roll on the day when none of us are needed.”

Clearing up litter or items that have been fly-tipped costs the council tens of thousands of pounds each year.

Those caught committing these environmental crimes can be issued with a fixed penalty notice – up to £150 for dropping litter or £400 for fly-tipping.