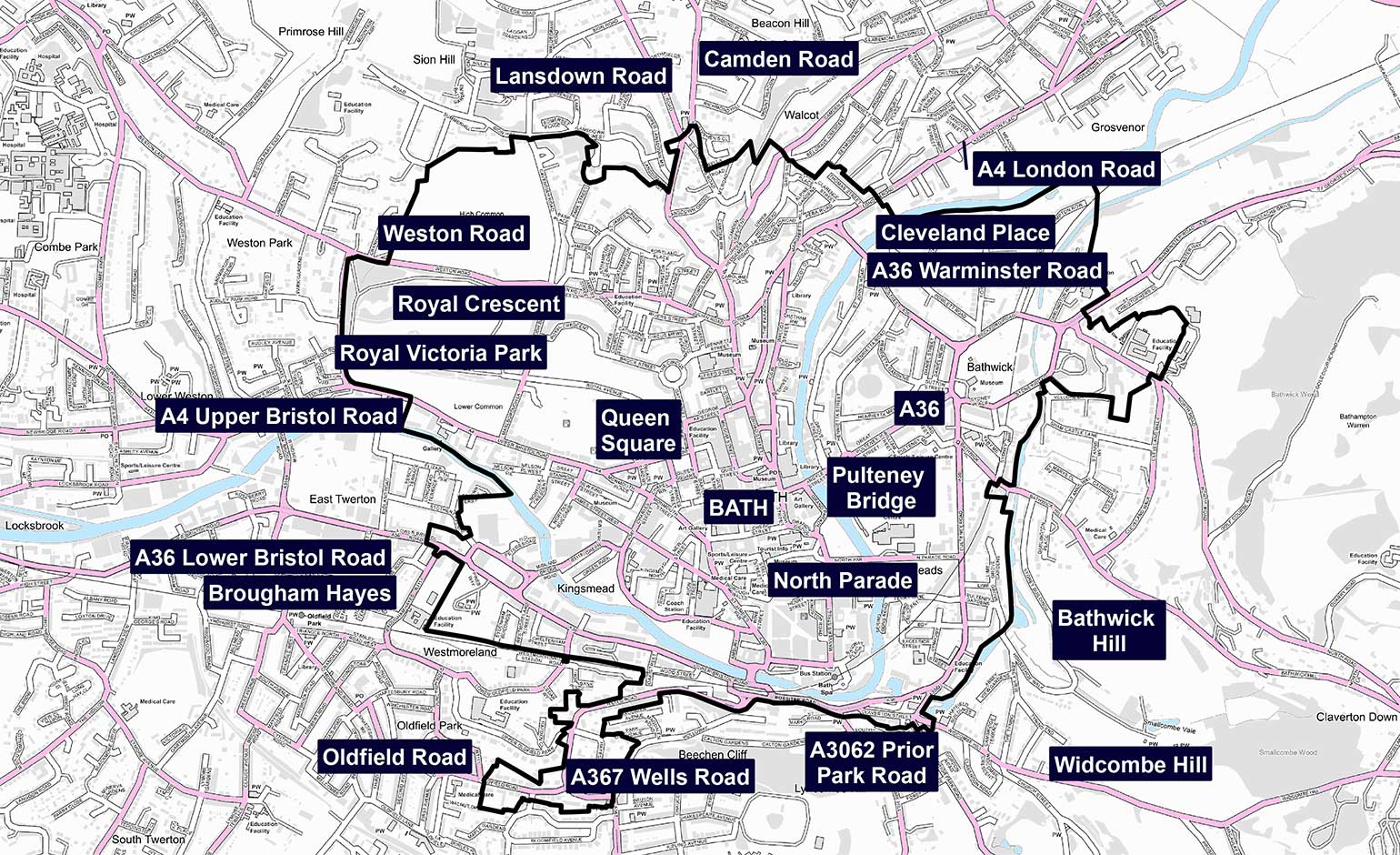 The data reveals a 21% reduction in nitrogen dioxide (NO2) pollution recorded across the city in 2021 when compared with 2019, before the pandemic.

Bath’s Clean Air Zone was launched in March 2021 to drive down high levels of roadside pollution caused by vehicle emissions.

It levies a charge on all vehicles, except cars and motorbikes, that don’t meet minimum emission standards to deter them from driving in highly polluted areas.

A report on the zone’s performance is set to go before the local authority’s Climate Emergency Scrutiny Panel on 27th June, highlighting improvements in air quality both inside and outside the zone.

It also highlights improvements in the number of cleaner, compliant vehicles in the city, and the investigations which have been made into understanding concerns about potential traffic displacement.

Key air quality findings from the report, compared with baseline figures from 2019, include:

The report notes that while air quality across the city has improved, with a clear decreasing trend in NO2 concentrations across all 123 monitoring sites, three sites within the zone continue to exceed the EU and UK limit value of 40 micrograms per cubic metre of air (?g/m3).

The sites at Walcot Parade, Wells Road and Dorchester Street “remain a concern”, and the council says they will be carefully monitored.

In 2019, 11 monitoring sites in Bath exceeded the limit value.

Additionally, the report highlights that there are fewer chargeable, polluting vehicles which don’t meet minimum emission standards travelling in the zone each week.

The numbers have halved from 1,148 per day during March to 550 a day, on average, during December. This is despite traffic returning to near pre-pandemic levels in the second half of the year.

A financial assistance scheme, which funded £9.4 million of interest-free finance and grants to local businesses and individuals affected by charges, has contributed to this improvement, replacing around 720 of the city’s most polluting vehicles with cleaner, compliant ones.

More vehicles are expected to be replaced by the end of 2022 either through the scheme, or privately, as businesses and individuals seek to avoid zone charges in Bath and across the UK, including in London and Birmingham, where zones are already in operation, and in Bristol and Bradford, where zones are due to go live in 2022/23.

The report acknowledges the effect of Covid-19 lockdowns to reduce traffic in the city during the first half of the year, which may have impacted air quality.

It also notes the impact of traffic diversions caused by the restoration works on Cleveland Bridge, saying: “Because of the impacts of Covid-19 and the Cleveland Bridge closure, the report states that is too early to assess the true impact of the zone alone on Bath’s air quality until further data is collected and analysed during 2022.”

Councillor Sarah Warren, deputy leader and cabinet member for climate and sustainable travel, said, “We are heartened to see this data from the zone’s first year of operation, and the difference it’s making to air quality and therefore our health.

“Three sites remain a concern for us, but these are being monitored, and the overall direction of travel looks good, with air quality at every monitoring station in Bath improving on baseline figures.

“It’s also great to see the city’s most polluting vehicles being replaced with cleaner ones. While there is clearly work to do, the zone is having its intended effect of changing behaviours and improving air quality, so I’d like to thank residents for their support.

“We know that high levels of NO2  are a public health risk, especially for people with existing heart and lung conditions.

“It can also cause fatal asthma attacks and affect children’s lung development. What’s been achieved is therefore very important and I am pleased we are reporting this achievement to coincide with Clean Air Day.”

The council has submitted data for review by the government’s Joint Air Quality Unit (JAQU) and awaits the outcome of its assessment on whether the zone has achieved success with a ministerial direction to reduce NO2 in Bath to within legal limits in ‘the shortest possible time’ and by the end of 2021 at the latest. Its assessment is now expected in autumn 2022.

Revenue from charges and fines is used to pay for the running of the scheme.

B&NES Council says any money made over and above the running costs must be reinvested in sustainable transport projects.

In the first year of operation, the zone generated £5.6 million from charges and penalty charge notices.

£2.5 million of surplus revenue over the next two years has been allocated to the West of England’s Combined Authority (WECA) fund for sustainable transport improvements across the region.