Charmy Down airfield near Bath is one of three in the local area that will be honoured with special memorials from the Airfields of Britain Conservation Trust this weekend. 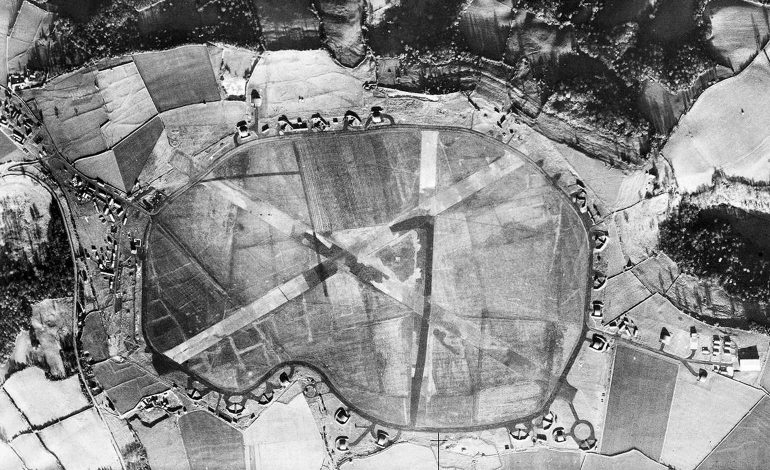 An aerial photograph of Charmy Down airfield, from 1943

As a result of a lot of planning and local co-operation, three memorials will be unveiled during the weekend of 1st and 2nd June 2019.

The memorials will commemorate Charmy Down, Colerne and Leighterton Airfields.

Charmy Down, to the north of Bath, a satellite to famous RAF station Colerne, was an important World War Two airfield that played a major part in the defence of Bristol and the West Country.

Various fighter squadrons resided there until 1943, after which the airfield provided service for RAF training units and elements of the United States Army Air Force.

A fair amount of the airfield still survives, and Charmy Down’s control tower continues to be one of the most individually photographed buildings of its kind anywhere in Britain.

Nearby Colerne remains one of the most famous airfields since it first opened in 1940. A combined fighter and aircraft maintenance base, it gave service during World War Two, with de Havilland Mosquito squadrons being heavily involved in night fighter and intruder duties.

By the end of fighting, Colerne witnessed some of the RAF’s first jet fighters, subsequently becoming a prominent home for flying training and transport units.

Leighterton to the west of Tetbury was one of the first airfields earmarked for the emerging Australian Flying Corps towards the end of World War One.

Training for pilots is still very much remembered through commemorations in the nearby village’s cemetery. The airfield survived to see civil aviation between both World Wars, being officially recognised in its role by the Automobile Association.

All three memorials are of the standardised design already widely utilised by the Airfields of Britain Conservation Trust.

The charity’s objective is to eventually commemorate each known disused airfield site in Britain with one of two forms of standardised granite memorial. Well over 100 have already been unveiled, with more than 200 scheduled to be in place by the summer of 2019.