The Bath Rugby Foundation has launched a special competition for supporters, giving them the chance to win two pairs of Silver season tickets at the Rec by buying a raffle ticket for just £10. 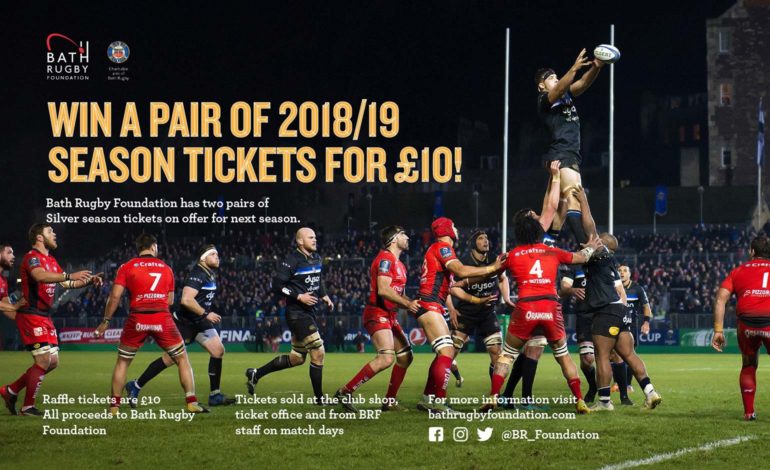 Raffle tickets will be sold for £10 per ticket from now until the end of the season, when the lucky winners will be revealed.

Proceeds from the raffle will go to Bath Rugby Foundation, the charitable arm of Bath Rugby

The Foundation aims to empower vulnerable children and young people in Bath and surrounding areas to succeed through programmes which focus on four areas: Health, Education, Employability and Inclusion.

Dale Hattey, one of the Foundation’s events managers, said: “The season ticket raffle is a new way for the Foundation to raise money to support our projects in and around Bath.

“We’re launching the raffle at the home game with Newcastle and we are hoping to sell many tickets.

“Really it’s a fantastic opportunity for people who can’t afford a season ticket and it is a chance for Bath Rugby supporters who tend to buy a season ticket every year, to secure a pair of Silver season tickets for a bargain price of £10.

“It is a phenomenal chance and opportunity.”

Raffle tickets will be sold by Bath Rugby Foundation volunteers at every match day at The Rec, at the Bath Rugby Ticket Office and Club Shop on Pulteney Bridge and supporters’ clubs.

If for any reason you are unable to purchase raffle tickets in person, email Dale.Hattey@bathrugby.com.

The lucky winners will be drawn at half time during Bath Rugby’s last home match of the season, against London Irish on 8th May.

The seasonal ticket raffle is being sponsored by Flying Pig Renovations.