Campaigners from the League Against Cruel Sports charity took to the streets of Bath at the weekend to call on the National Trust to permanently stop licensing trail hunting on its land. 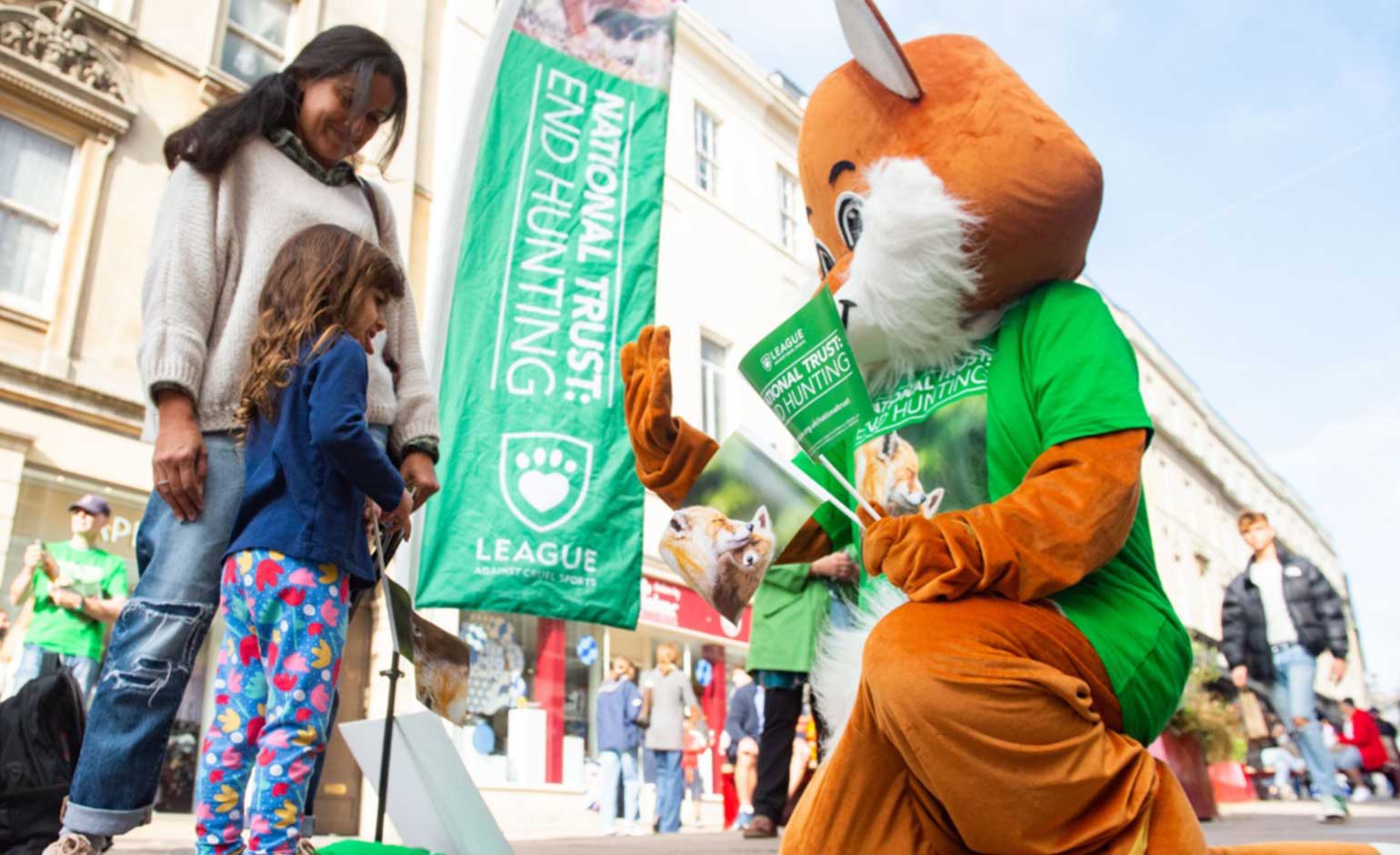 Trail hunting involves the following of a scent either on foot or horseback with dogs along a pre-determined route, replicating a traditional hunt without a fox being chased, injured or killed.

Volunteers and staff from the animal welfare charity, including one in a fox costume, gathered on Stall Street in the city centre to urge the public to take action and sign up to its National Trust campaign.

The National Trust has temporarily paused licensing of trail hunting on its land following the leaking of webinars hosted by The Hunting Office, the sport’s governing body, late last year.

Nick Weston, head of campaigns at the League Against Cruel Sports said: “It was lovely to speak with families and individuals from around Somerset today, including many National Trust members, and the League fox brought a smile to many people’s faces.

“However, many people were shocked that not only does fox hunting still take place in the countryside but that the National Trust allows this cruel blood sport to take place on its land.”

The day of action in Bath was one of a series taking place across the country ahead of the National Trust’s AGM on 30th October, when there will be a vote in which members will get the chance to call for a permanent ban on the licensing of trail hunting. 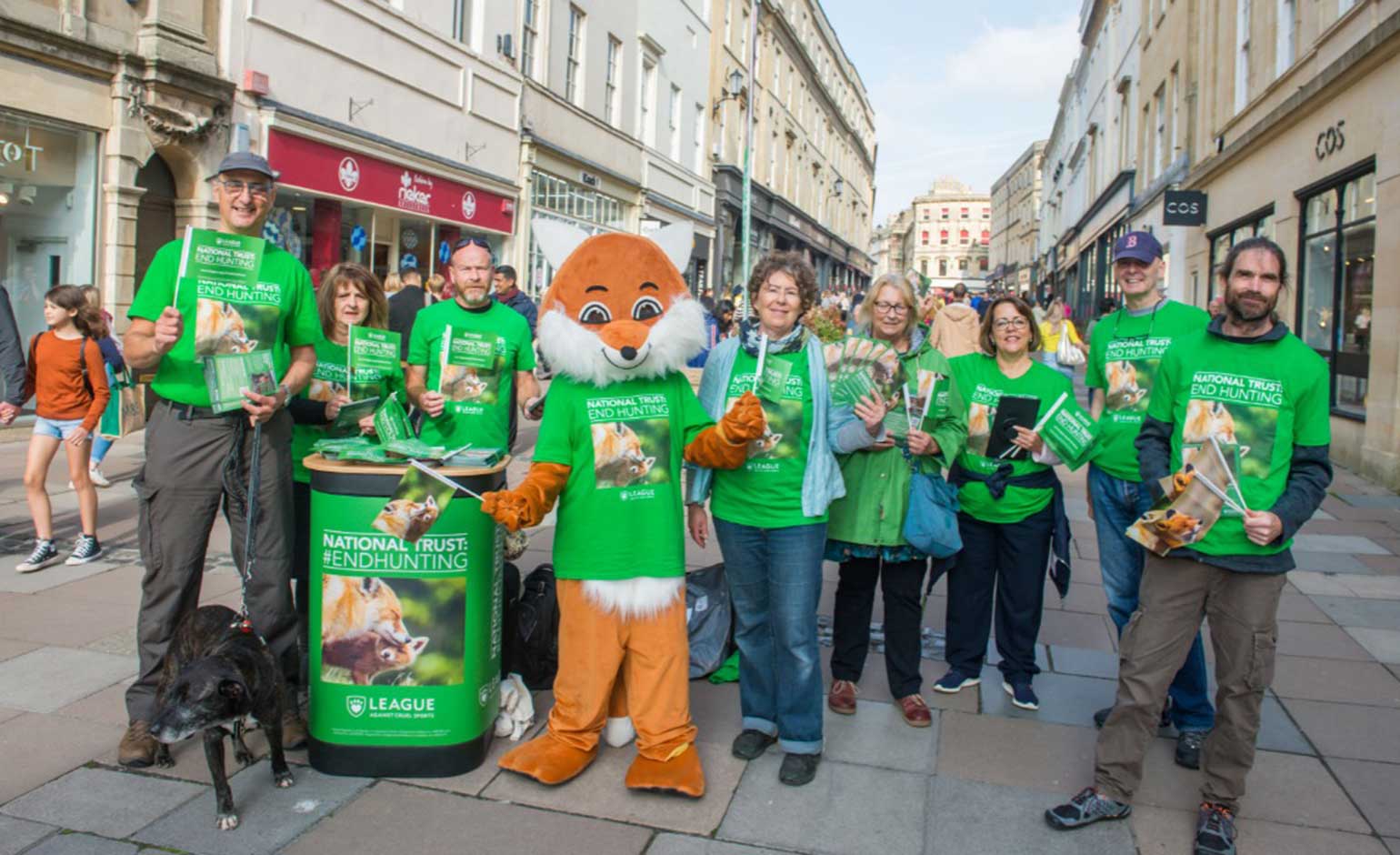 Nick added: “It is evident that tragically fox hunting is still taking place across England and Wales despite the ban, so we are calling on the National Trust to stop licensing ‘trail’ hunts on its land once and for all.”

A fox-hunting ban outlawed fox hunting in England and Wales in 2005 but in the 2019/20 season, the League Against Cruel Sports charity compiled figures revealing 485 separate eyewitness accounts of suspected illegal hunting.

Nick Weston added: “The overwhelming majority of the public oppose fox hunting and it’s time to consign this barbaric activity to the history books for good.”

“We’ve been listening carefully to both sides of a highly polarised and passionate debate around trail hunting and will be considering a number of issues before reviewing our position on trail hunting later this year.

“This means we will not be operating the usual licence application process during this period.”

A spokesperson for the Countryside Alliance said: “The League Against Cruel Sports has spent the last 16 years making ridiculous claims about trail hunting yet nearly every time it makes allegations to the police or a court they are found to be false.

“There have been hundreds of thousands of days legal trail hunting carried out by hunts since the Hunting Act came into force and only a handful of convictions relating to registered hunts.

“Hunts who use National Trust land for these lawful activities are required to comply with a strict licensing policy. The Trust’s Board of Trustees have stated they are satisfied with the implementation of, and the compliance with, the licensing conditions.

“We have received incredibly positive feedback from National Trust members living in and around Bath who are voting against the motion to end trail hunting on National Trust land. Like them, we hope this divisive motion is defeated so that the National Trust can get on with doing its real job.”