It’s been announced that Beckford’s Tower in Bath has been put on the Historic England at-risk register, with a fundraising appeal launched to support its repair and future development. 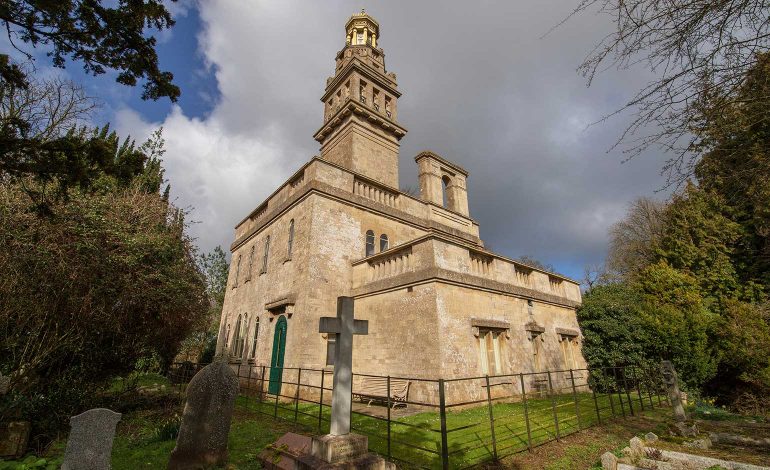 The Beckford Tower Trust and its sole trustee, Bath Preservation Trust, have prepared a £3m programme of works to and activities around the Grade 1-listed Beckford’s Tower and are currently awaiting the result of a bid to the National Lottery Heritage Fund (NLHF).

The 120-foot neo-classical Tower was originally a retreat for the wealthy and eccentric writer and collector William Beckford (1760-1844) when he retired to Bath following exile abroad and the sale of his former home, Fonthill Abbey.

The work of Henry Edmund Goodridge, it is regarded as one of the most important architectural designs of the 1820s and is an integral part of Bath’s historic landscape.

Together with the museum housed in the rooms at its base, it is an important educational and community focus.

The Tower’s prominent position on an exposed escarpment outside Bath makes it particularly vulnerable to increasingly extreme weather conditions.

Despite regular maintenance, the weather and the timber construction of the Tower lantern together with the fragile metal window frames have resulted in some water penetration and associated risk to the building.

It is, therefore, a matter of urgency to raise the funds to restore and repair the lantern and windows.

While this is the most urgent conservation work, the Tower Trust’s Lottery bid also contains a plan to engage with local communities and to reconnect the Tower and Museum site with its surrounding built and landscape heritage.

The proposals would open up new public spaces and improve access include William Beckford’s former garden, now Lansdown Cemetery, and paddocks within the listed landscape, which will allow public access to the currently inaccessible Grotto Tunnel.

A new presentation of the Museum display rooms, backed by a significant research programme, will extend the understanding of William Beckford, his life and times and address its resonances in the present day.

John Ette of Historic England said: “Heritage at Risk architects and landscape architects visited to look at the condition of the Tower in more detail in 2018 and 2019 and we will continue to advise and support the Beckford Tower Trust.

“The successful delivery of the Trust’s planned programme will lead to the building being removed from the Heritage at Risk Register as well as helping restore key features of the pleasure grounds; providing a sustainable future for the site under the conservation management of the Trust.”

“The Tower is a precious Grade 1-listed monument which can be seen from across the city of Bath and for miles beyond,” said Caroline Kay, CEO of Bath Preservation Trust.

“We are keen to be able to do a thorough job in repairing the Tower in a way which will really endure, which will involve full scaffolding and specialist craftspeople, but this is beyond the Tower Trust’s means without external help.

“We know that many people are interested in the Tower either for the importance and beauty of its architecture or for the stories, many of them with resonances today, about the life of William Beckford, and ideally, with the Lottery’s help, we will be able to expand the scope of the project to include the involvement of many new audiences.

“Whatever happens with the Lottery, however, we must plan get on with the conservation needs and to raise as much as possible to support this programme.

“We would love to hear from anyone who would like to help us or be kept informed of progress.’