University of Bath psychologist Dr Ian Walker has claimed a new world record for crossing Europe by bike solo and unsupported in the quickest time ever. 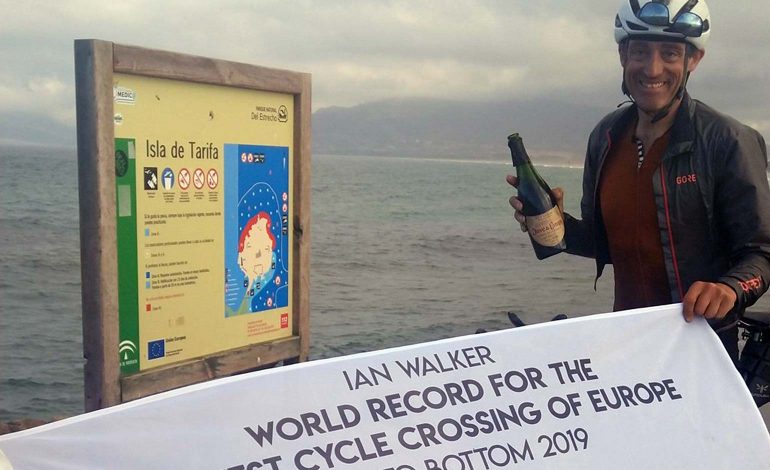 Dr Walker is a new world record holder, having crossed Europe by bike from north to south in the quickest ever recorded time.

Rolling over the finish line in Tarifa, Spain on Monday morning having cycled the last leg overnight, Ian completed the top to bottom ride in just 16 days, 20 hours and 59 minutes.

His time broke the previous world record by over two days; a world record which was in fact set just four days before Ian set off.

His ride started from Nordkapp, the most northerly part of Europe in the far reaches of Norway in the Arctic Circle on midsummer’s day, Friday 21st June.

In just over two weeks he has passed through 10 countries – Norway, Finland, Russia, Estonia, Latvia, Lithuania, Poland, Germany, France and finally Spain – clocking up over 6,300 km, around 4,000 miles.

His world-record breaking ride also coincided with a European heatwave, which saw temperatures rocket to nearly 40 degrees in places.

To sustain a winning pace of around 24.7 km per hour and to fuel his body to cycle for up to 20 hours a day over consecutive days, Ian had to find and consume up to 12,000 calories in food along the way every day, and find water to keep himself hydrated.

On completing the epic ride he said: “It feels amazing to set yourself a really difficult target and then achieve that through such a long period of hard work.

“The best thing was probably riding through remote areas under the darkest night skies I’ve ever seen. The worst part was probably forcing myself to get moving after just three hours’ sleep each night.”

Ian only started cycling ultra-distance in 2016, having switched from ultra-distance running. In the three years since, he has won the unsupported North Cape 4000 race, won the TransWales 2018 race and completed the Transcontinental Race 2017, among other racing records.

His research at the University of Bath is related too, focusing on methods to encourage people to opt for more active travel over driving, and ways to ways to make cycling safer.

His high-profile studies have looked at the psychology behind wearing a helmet and the distances drivers give when overtaking cyclists.

Ian completed his world record ride on behalf of Roadpeace – the charity campaigning for better and safer roads. To date he has raised over £2,500.

On the work they do, he said: “Death and injury on our roads are a preventable problem that we don’t take seriously enough.

“Roadpeace address them by trying to stop the problem at its source, and they also do vital work supporting the families of the bereaved.”

A regular commuter from Bristol to Bath by bike, a round trip of around 50 miles, Ian will soon be returning to the daily routine, but not before a well-deserved family holiday in Spain.

On plans for a future adventure, he said: “I honestly haven’t thought about it yet – at the moment I’m just happy to sit still for more than two minutes!”

About the feat, sports nutritionist within the University’s Department for Health, Dr Javier Gonzalez whose own research looks at the effect of endurance sports on the body’s energy stores, added: “Ian had to turn his body into an energy processing machine, burning up to 10,000 kcals on some of the longest days in the saddle.

“He fuelled that mainly from what was available at service stations, but made some wise choices with yoghurt drinks, as the types of sugars and protein in these drinks have been shown to enhance recovery of important energy stores in the muscles and liver after exercise.”

“It is incredible that Ian would attempt to follow up last year’s victory in a trans-European race with an attempt at a solo, unsupported world record across the continent.

“His journey and recorded insights along the way speak to mental resilience and dedication as much as to the physical demands of the journey.

“There is so much to learn from his success. We can’t wait for him to be back so that staff and students can congratulate him.”

You can support Ian and donate to Roadpeace here.