Bath resident Bill Martin has been recognised for his central role in supporting some of the most vulnerable and fuel poor households in the city, by the Heat Heroes Awards. 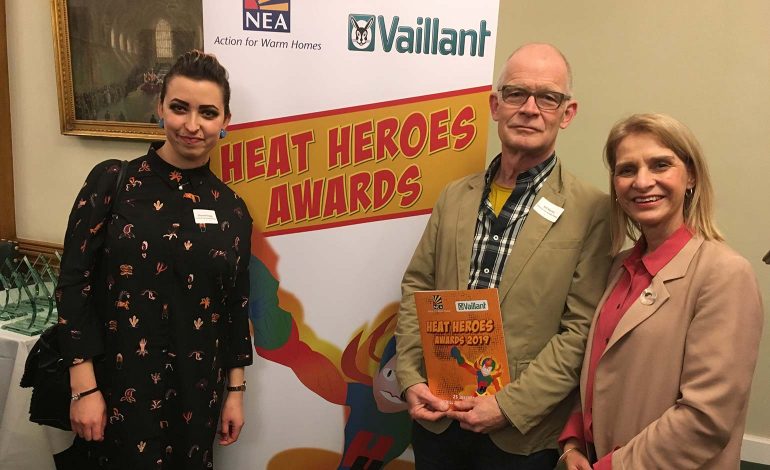 He is a volunteer at the Centre for Sustainable Energy, and runs advice surgeries in Bath providing information on energy efficiency, switching suppliers and on any potential discounts.

Shareen Elnagy, one of the energy advisors, said: “Bill is an amicable character who has been an absolute delight to work with since I started at CSE.

“He always has a smile on his face whilst helping others, showing empathy and commitment to those who need our help, and we would not have been able to reach out to so many households without Bill.

“On behalf of CSE I would like to say a huge thank you to Bill for all his hard work over the last 6 years.”

It is estimated in the past six years, Bill has run more than 50 events and supported around 750 households.

Bill also often carries out home visits to offer support to local residents where he is known for his sound advice and his compassionate nature.

He talks people through their energy bills, demonstrates how to use heating systems, gives advice around mould and damp, and discusses issues around debt.

He gives an all-round service, with no cost, to those in the city who need his help the most.

Bill was nominated for the award by Kate Thomas, who said: “We would like to take the opportunity to thank him for all he has done.

“It should be recognised how central his role has been to supporting some of the most vulnerable and fuel poor households in our area.”

With Bill set to retire, the recognition by the Heat Heroes Awards truly is a testament to his valuable and important work in the community over the last six years.

Wera Hobhouse MP for Bath said: “It was such a pleasure to meet with Bill and celebrate all his hard work and commitment to the Bath community.

“This award rightly recognises all the help and support he has given over the years to our city, and I wish him well with his retirement plans.”