Over £5,000 has been raised for local children’s hospice at home charity Jessie May through fundraisers taking part in the Bath Half Marathon last Sunday, 17th March. 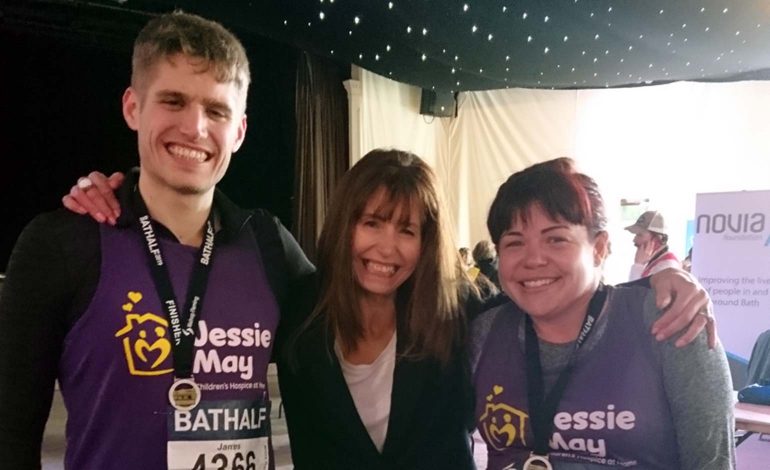 Twelve supporters lined up in Bath for the half marathon in support of the charity, whose nurses support local families caring for a terminally ill child.

Runners included James Purrington, the brother of Jessica May; whose parents Chris and Philippa Purrington set up the charity Jessie May in 1996 in her memory.

James was celebrating his 27th birthday on Sunday while running the Bath Half in memory of his sister.

His mum Philippa cheered on James and his girlfriend Cecelia who were taking part together in support of the charity.

The Great British Bake Off semi-finalist and local star baker Briony May also donned a purple Jessie May running vest on Sunday to boost funds for the charity.

More than £5,000 has been raised for Jessie May so far through all 12 runners’ fundraising efforts, with more donations coming in following the half marathon taking place.

Helen Mackie, Senior Community Events Fundraiser at Jessie May, said: “What a fantastic day Sunday was! The atmosphere was just amazing and it was a real pleasure to cheer on all our runners.

“Thank you to everyone who ran for our charity; to James, Cecelia, Amira, Briony, Joanna and Matt – and the team from Gradwell Communications in Bath; Jamie, Nathan, Arzegorz, Ben, Rob and Michael.

“It was incredibly humbling to see our purple running vests in the sea of Bath Half participants and see all the wonderful people who were taking part for us. £5,000 is an astounding amount of money and we are amazed that donations are still coming in now via the runners’ various fundraising pages and pots!

“Thank you to every single person who took part on Sunday – we hope you all had an incredible time and have since enjoyed a well-deserved rest!”

James said: “It was an amazing and heart-warming experience seeing all the support for the Jessie May and charities in general. I am so grateful for the sponsorship all of the Jessie May runners managed to raise for such an amazing cause.”

“I’d never run in any type of race before and was nervous about taking on the challenge but knowing how much of a difference every penny I raised would make to some very special children and their families is what motivated me through every cold, dark and wet training session.

“The event itself was just fantastic, an amazing atmosphere and it flew by! If anyone is thinking about signing up for a future running challenge with Jessie May my advice would be to just go for it!”

The Bath Half returned after last year’s cancellation due to heavy snow; bringing together 15,000 runners to the start line on Great Pulteney Street.