Local people are being asked to help as part of an appeal launched after a new report revealed around 100 vulnerable people in B&NES die unnecessarily during the cold winter months each year. 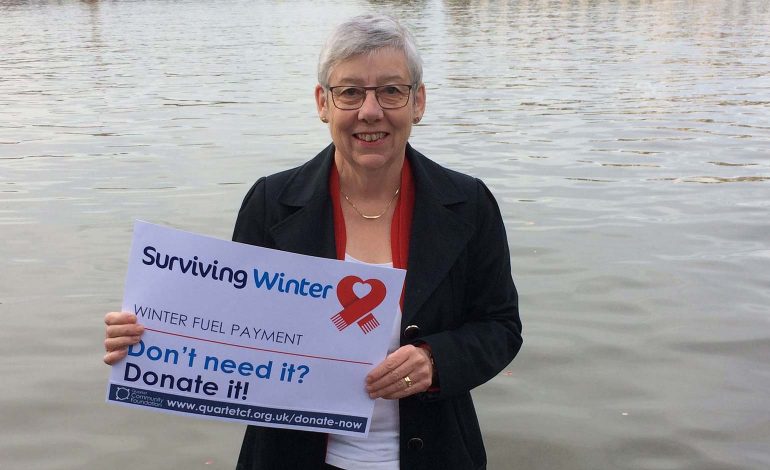 The new report reveals that deaths last winter hit the highest levels since 1976. The Quartet Community Foundation are asking local people to help older and vulnerable people get through the cold winter months by supporting the Surviving Winter Appeal.

Already many local older people who do not need their winter fuel allowance, plus other generous local people, have donated to the appeal to help people faced with choosing between paying the bills and putting food on the table and those who are socially isolated.

Winter is a dangerous time for old and vulnerable people; provisional data for England and Wales shows that excess winter deaths hit their highest level in more than 40 years during 2017-18, when an estimated 50,100 people died – 45% higher than the previous year.

The Office for National Statistics comes up with the excess winter deaths figure by comparing the number of additional deaths between December and March to the rest of the year.

In B&NES, 100 more people died during the cold winter months than during the autumn and spring quarters. Across the West of England this figure rises to 530 people.

Sue Turner, Chief Executive of Quartet Community Foundation said: “It’s amazing how people respond every winter to support the appeal and help spread some cheer during the cold winter months.

“Whether it’s lunch clubs fighting isolation and loneliness, community transport schemes taking people to the shops and doctor’s appointments or grants to help them pay their fuel bills, the £177,000 raised since 2011 has already made an enormous difference to the lives of elderly and vulnerable local people.

“We couldn’t do this without the support of people across the region so we’re asking those who can afford it to help elderly people in need get through the cold winter months.”

He said: “In the winter it’s freezing in my flat. I’m 73 and had a brain injury in 2001. When it’s really cold I only have the heater on in the hallway so when you come in the flat it seems warm. It was magic getting the cheque, I do appreciate it.”

Donations are helping older and vulnerable people in many ways including providing:

Groups that benefited from the last appeal include SWAN Advice Network (towards the provision of Community Transport), West of England Rural Network, South Gloucestershire Citizens Advice Bureau and LiveWest Housing.

To donate, visit the Surviving Winter Appeal donation page or go directly to https://quartetcf.org.uk/donate-now/ and select ‘Surviving Winter’ from the drop down menu.