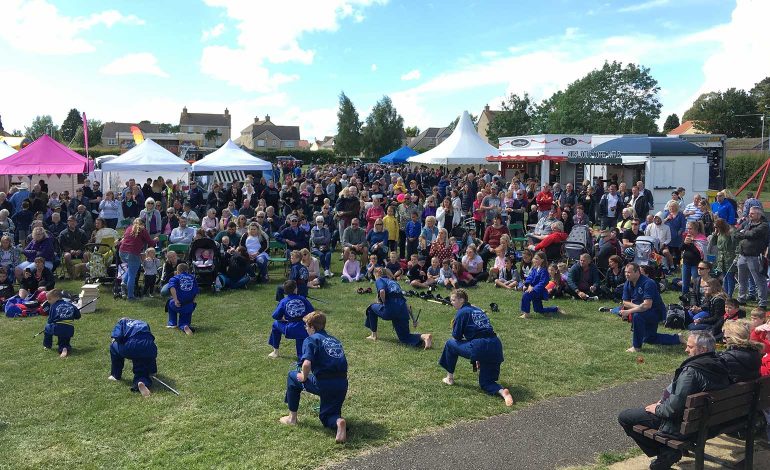 The event, which included a special flag-raising ceremony with festival organisers and School Headteacher Damian Knollys, featured a huge array of stalls and attractions, such as the village’s third Official Push Kart Race, the return of the Peasedown Diamond cider, Peasedown’s second Dog Show, and the results of the Party in the Park Grant Giveaway.

The Sara Holley Community Award, set up in 2011 in memory of a life-long resident who passed away, was won by a woman who has spent the last 15 years serving the community as part of St John’s Church, and has been instrumental in working behind the scenes at the Somer Valley Foodbank.

Jane Street’s commitment and hard work behind the scenes has helped the church become the community-minded and community-focused organisation that it is today.

Her arrival in Peasedown St John in 2004/2005 was an interesting one, as she came to the village with her husband, Revd Matthew Street, who was sent by ‘higher authorities’ to work.

The couple soon became active with their hands-on approach to getting things done – which didn’t go unnoticed.

Behind the scenes Jane and Matthew have been instrumental in setting up Children’s Holiday Clubs, giving away over £10,000 to good causes, and working closely with the local primary school to organise breakfast clubs and other activities for children.

Party in the Park Chairman, Nathan Hartley, said: “For the last 15 years, Jane has been managing the churches finances, and ensuring they meet all their obligations as a registered charity.

“As well as her work with the church, she has played a significant role in the development of the Somer Valley Foodbank serving on the management team – working hard to ensure that the 7,000 food parcels given out across the Somer Valley have gone to people who have needed them the most.

All of the money will be reinvested back into Peasedown St John, either through future events or the Party in the Park Grant Fund.

To add extra excitement to the proceedings, this year’s Special Guest Host was Rusette Auton from Bath Theatrical Costume Hire – which celebrated its 50th anniversary this year.

Thanks to the support of the Somer Valley Foodbank volunteers, Party in the Park volunteers, over 60 hours of time were given to staff the festival gates, and ensure the event ran according to plan, and to schedule.