Plans for the partial redevelopment of Twerton Park and Twerton High Street by Bath City FC have been submitted to Bath & North East Somerset Council. 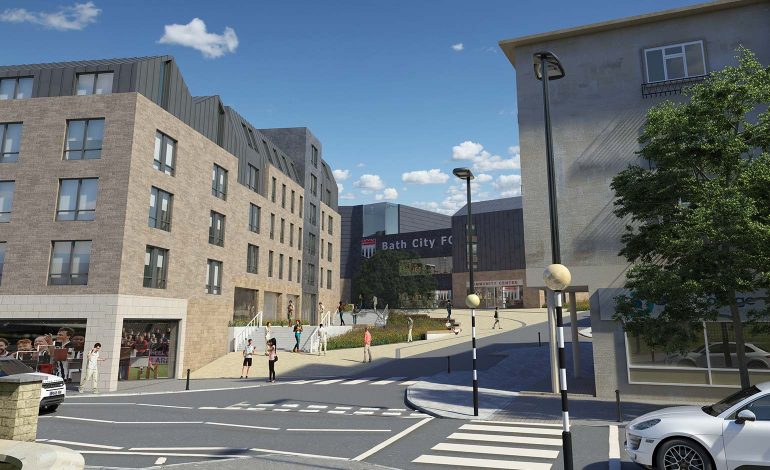 The application comes after four rounds of public consultation and community liaison, and on the back of Bath City FC’smost successful season for many years.

Bath City FC announced in 2017 that it was working with Greenacre Capital on a joint scheme to redevelop Twerton High Street, land to the rear of the High Street and part of Twerton Park. The scheme is the largest single investment in Twerton for more than 50 years.

The plans submitted include a new grandstand and facilities, a community hub, and a 3G pitch for the Club, whilst the residential elements include affordable housing, co-living apartments, and the partial regeneration of Twerton High Street, plus improvements to public spaces in the area.

The community-owned football club has already made public its need to complete the project in order to remain in Twerton and to secure its financial future.

Bath City FC has £1 million debt to be paid by 2022 and is currently running at a loss.

Nick Blofeld, Chair of Bath City Football Club, said: “We are pleased to have submitted a planning application to B&NES Council, for what we think is an exciting redevelopment opportunity for Twerton Park and beyond.

“The significant investment this scheme will bring to Twerton will not only benefit the Club, but also the local area with the rejuvenation of the High Street, and new community facilities.

Coinciding with Bath City FC’s proposal, Bath and North East Somerset Council has secured £650,000 in funding from the West of England Combined Authority (WECA) as part of the “Love Our High Streets Project,” which will look to increase footfall and improve facilities on Twerton High Street.

Mr Blofeld added: “The last round of consultation for the redevelopment proposals was great, as it saw our highest attendance from the local community.

“We are now hopeful that as a community and a Club we will be able to realise these plans, which will transform the Club and also improve and update Twerton High Street.

“With support from supporters and the community for this redevelopment, we hope to secure the financial future of the Club.

“Partnering with Greenacre Capital means the Club’s debts can be cleared and we will be able to generate new and more reliable revenue streams, from much better facilities.

“Without this scheme the survival of the Club in Twerton is extremely uncertain.”

The planning application is now live on the Bath and North East Somerset Council website, with residents being invited to share their views on the plans for the area.