The award-winning Electric Bear Brewing Company has been taken over by a Bath couple, with an investment programme planned to further develop the popular business. 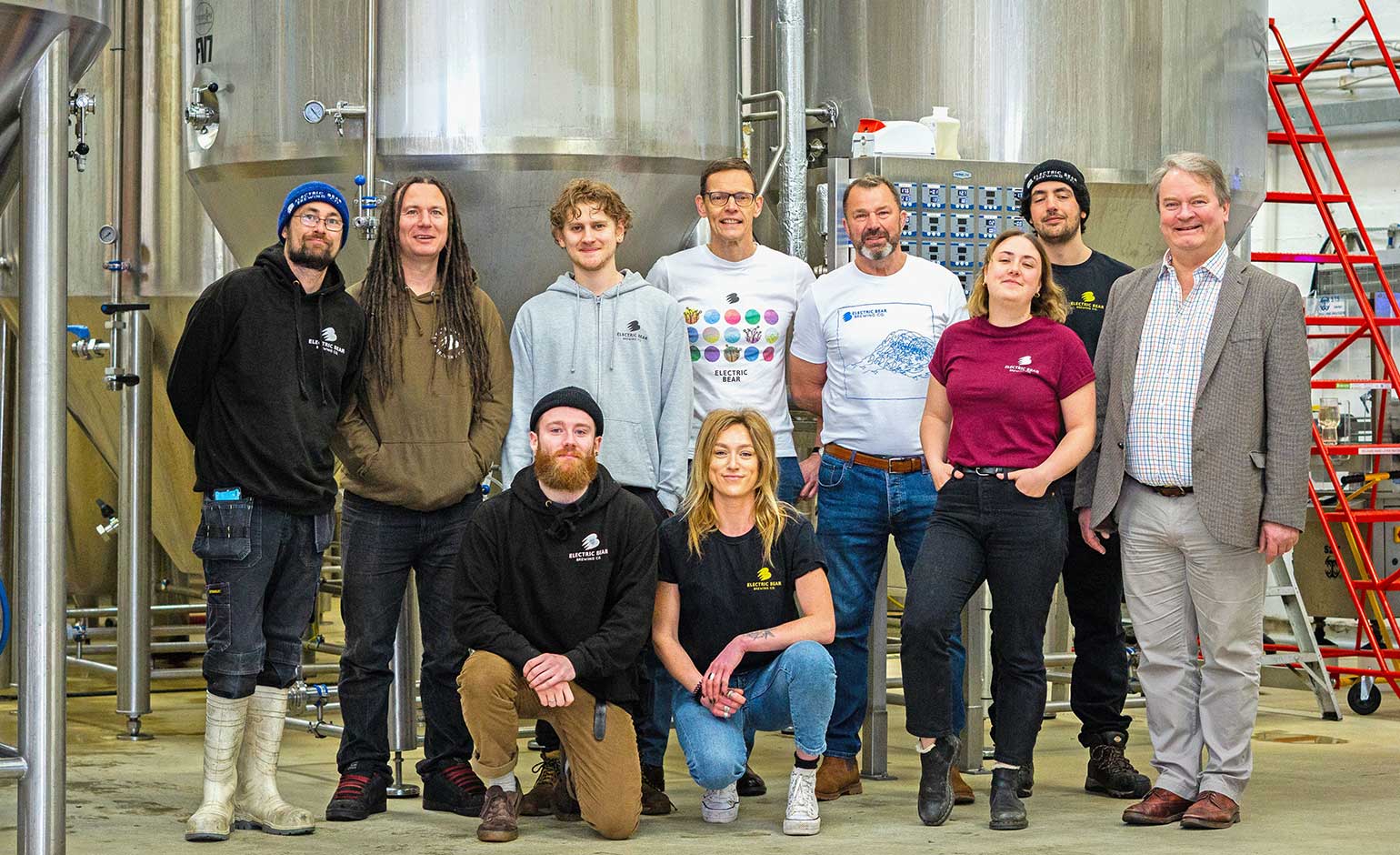 Taking over the city’s only craft brewery, new owners David and Mary Horner have lived and worked in Bath for over twenty years.

David is the Managing Director of Chelverton Asset Management in Laura Place.

He has nurtured an ambition to own a craft brewery for decades and when he discovered the Electric Bear Brewing Company was seeking a new buyer just before Christmas, he jumped at the opportunity.

David said: “I’ve always wanted to own a brewery and have missed out on a number of occasions over the years, so when I heard that Bath’s only craft brewery, right here on my doorstep, was available, it was too good an opportunity to miss.

“Electric Bear is hugely popular amongst locals, who have queued round the block for the weekly taproom sessions and love the fun, eye-catching can designs.

“The brewery has so much untapped potential and an excellent brewing team, so we are very much looking forward to further developing the brand over the next few years.

He continued: “We are currently expanding the sales team and have employed a University of Bath graduate to help develop our sustainability objectives.

“We are investing in new brewing equipment and working with several Bath businesses in our mission to make Electric Bear one of the best-known craft breweries in the region.

“We have lots of exciting plans in the pipeline and would like to invite the owners of local pubs, restaurants, bars, off licences, farm shops and, of course local beer-lovers, to visit us at the brewery and discover our fantastic range of delicious beers”.

The Electric Bear Brewing Company, based in Brassmill Lane, was founded in 2015 by former home-brewer Chris Lewis and was named after the old 19th century Bear Brewery in Bear Flat, described in 1893 as “undoubtedly one of the most noteworthy breweries in the West of England”.

Both the brewery and the much older Bear Inn alongside were destroyed during the Bath Blitz, when the city was bombed during the World War II Baedeker raids in 1942, and only the Bear Inn was later rebuilt.

The ‘electric’ part of the name comes from how the brewery first powered its brewhouse kettle, using a ‘copper’ to boil the wort, the pre-fermented beer ‘starter’ comprising malt extracted from the grain mash and water.

“We are particularly well known in the trade for our core range of most popular beers, including our 4.6% gluten free Helles lager ‘Mixtape’, 4.2% American pale ale ‘Werrrd!’ and the latest addition, our 5% pale ale ‘Tondo’.

“We supply kegs, casks and cans to pubs, restaurants, bars, bottle shops, retailers such as M&S and via our online shop and Taproom within the heart of the brewery.”

The team estimates it has brewed enough beer to fill all the baths in Bath.

During the Covid lockdown period, the demand for Electric Bear beer increased dramatically, boosting online sales by over 400%, and resulted in the business winning a coveted Feefo Gold Trusted Service award for brewing and distributing 120,000 cans during the most challenging trading conditions.

There is fierce competition amongst the company to come up with the best names for their new beers, such as ‘Inspector Remorse’, ‘Bless you on the 5th’ and ‘All the Best Names Get Vetoed’, which have been exported to Belgium, Italy and as far afield as Australia.

Electric Bear has produced several collaborative beers with local Bath businesses, including ‘Mokoko Chocolata’, a 5.2% stout, featuring coffee from the Bath-based café roastery Mokoko, and ‘Furever Home’ for the Bath Cats & Dogs Home charity, which featured images of individual cats and dogs on the cans to help raise funds and find the lonely pets their ‘furever’ homes.

The Taproom is open from Thursdays to Sundays, with regular street food, DJs, live bands and a large sports screen.

The brewery shop is open 7 days a week at Unit 12, The Maltings, Brassmill Lane.

Curo set for Government award thanks to high-quality work placements