For the first time in Bath Ales’ 24-year history, the company is welcoming two new brewing apprentices to the team, based in Warmley near Bath. 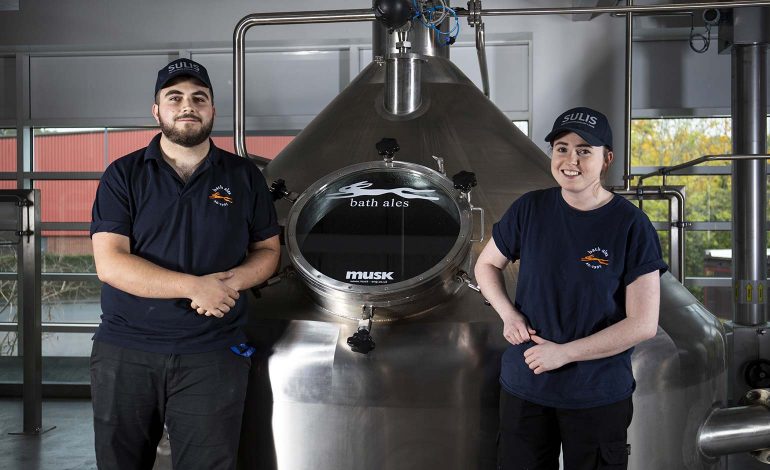 The successful candidates, Ella Jones, 22, and Rob Alder, 23, overcame serious competition to land their roles on the two-year apprenticeship scheme at the Hare Brewery.

Singled out for their creative flair, desire to learn and passion for beer, the pair, who have both experimented with home brewing in the past, will be learning the craft of brewing and helping to produce Bath Ales favourites, including Gem and Sulis.

As well as gaining hands-on experience in the brewery, the apprentices will develop their technical knowledge by undertaking academically-based training sessions at Nottingham University.

They will complete a ‘Level 4’ qualification, which is the equivalent to the first year of a bachelor’s degree.

The new course, which launched in February 2019, is the first of its kind in the UK. It was founded by a trailblazer group of passionate brewers, including Bath Ales’ head brewer, Georgina Young, and the British Beer & Pub Association (BBPA).

When asked about becoming one of the first apprentices, Ella said: “It’s incredible! I feel so privileged to have been given this opportunity and be working alongside the Bath Ales team.

“I’m looking forward to learning more about the art of brewing, as well as visiting other breweries and hop farms across the UK.”

Rob claimed that while the responsibility of his new role can feel ‘daunting’ at times. He said: “I’m looking forward to broadening my horizons and developing my skills to become a well-rounded brewer.”

Both Rob and Ella will report to Bath Ales’ head brewer Georgina Young, who oversees the brewing and packaging of Bath Ales’ beer brands.

Georgina said: “We’re delighted to be welcoming Rob and Ella to our team. It’s so important that we offer high-quality training opportunities and look to nurture the next generation of talent within the beer industry.”

“Apprenticeships are a great foot in the door for people wanting to work in brewing, so we’re really happy to be able to offer this opportunity here at Bath Ales.”

Hare Brewery, which opened its doors in May 2018, can produce over 14.5 million pints every year – doubling Bath Ales previous brewing capacity.