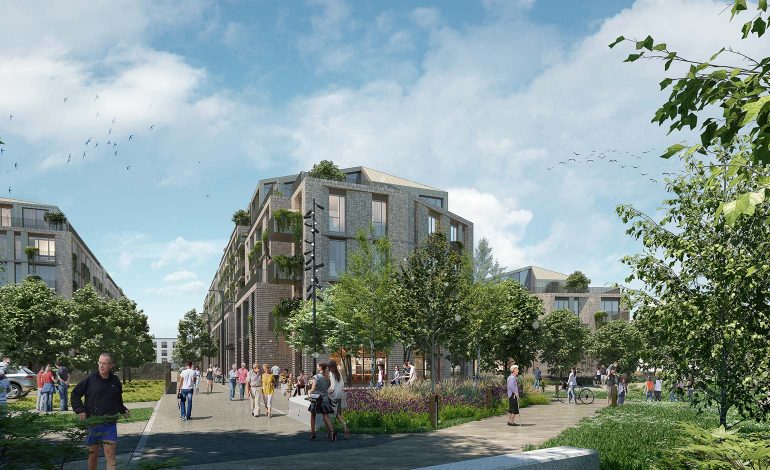 How the proposed development could look | Image courtesy of Guild Living

Guild Living will develop and then manage the mixed-use scheme that includes residential, health, wellbeing and leisure facilities.

The proposals are designed to help older people live better. The company is focussing on city centres in order to accommodate older people to live within the heart of their communities.

By living alongside families and being located above a nursery, gym and various dining and leisure facilities, residents are able to maintain their independence.

The site will also combine multi-generational facilities including a nursery for young children. Research from Harvard University has shown clear health benefits of interaction between young and old.

Other shared facilities include a fitness centre, community cafe, cinema, library and crafts space, alongside shops, and a multi-faith room.

Guild Living’s on-site staff will also curate social events and activities. The scheme’s design has been shaped to encourage interaction between the different age groups and drive footfall in support of local businesses.

The ambition of the development is to support the NHS through the inclusion of transitional beds and step-down services, enabling hospital patients to go back into their homes – reducing the demands on the local health service.

Developers say their proposed plans have the potential to free-up much-needed family housing and contributing towards the local five-year housing supply.

The plans also fall in line with the council’s Placemaking Plan by creating an attractive new townscape and public realm which will enhance the relationship between the city and the river.

Eugene Marchese, co-founder and director at Guild Living said: “We cared for people differently in the past because we either lived together or lived around the corner, we used to be able to pop-in and engage with older people in the family.

“Nobody – no matter their age – wants to live in isolated villages or feel like they exist in a silo.

“There is a severe lack of quality housing for those entering what I would call the “third age”, so it comes as no surprise that so few people live in dedicated later living homes.

“By building these communities in vibrant, urban locations, creating facilities that everyone can use and providing the care and support when it is needed, we can drastically improve the quality of life for our elderly.”

“We would like to thank B&NES for its support and the local community for the feedback we have received which has formed an integral part of the proposals.

“If approved, we look forward to bringing new homes and new facilities to the area.”

Michael Eggington, co-founder and CEO of Guild Living added: “With an ageing population and a growing social care crisis, it’s clear that the demand for later living will exponentially increase.

“But it isn’t simply about the strong economic case of preventing hospital stays and keeping people active – it’s about the social benefits to communities and the human cost of not doing this.

“Together with Legal & General, we are planning on creating real mixed-use, intergenerational communities across the country where there is real demand from existing homeowners.

“Our ambition is to offer choices which can support the lifestyle and care needs of our residents.”

To comment on the planning application, search the B&NES planning portal using the application number 20/00259/FUL or click here.