The Beau Street Hoard roadshow will be touring Bath and beyond this autumn, bringing with it the opportunity to get up and close and personal with 2,000-year-old silver Roman coins. 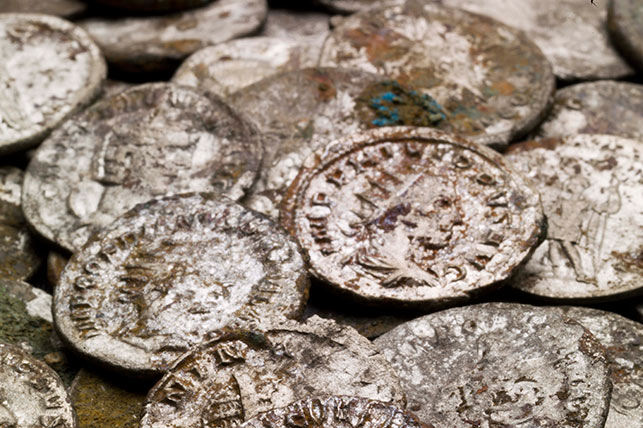 The roadshow is part of a project aimed at bringing communities closer to the 17,577 Roman coins that make up the fabulous Beau Street Hoard.

The project is supported by the Heritage Lottery Fund.

At the roadshow, staff from the Roman Baths will bring out a selection of the hoard’s coins for handling.

They will also provide a wealth of information, activities and displays so visitors can learn about this important find.

Fascinating illustrated talks examine the hoard, its discovery and significance. It’s a fun family event – and you can even strike your own Roman coin to take home.

The roadshow will be in Combe Hay Church from 10.30am and until 4pm on Saturday 6th September.

“Thanks to the efforts of our staff and the Heritage Lottery Fund this roadshow is just one opportunity to discover the hoard – and there will be many more opportunities in the future.”

Peter Duppa-Miller, from Combe Hay Parochial Church Council, said: “The community is really looking forward to the Beau Street Hoard roadshow coming to Combe Hay and a chance for us to see and handle the actual coins from the collection.”

The hoard was excavated by archaeologists on the site of the new Gainsborough Hotel in Beau Street, Bath, in 2007.

The Roman coins span the period from 32BC – 274AD and were found in eight separate money bags, which were fused together.

In March 2014 Bath & North East Somerset Council was awarded a grant of £372,500 from The Heritage Lottery Fund to purchase the hoard, and, from January 2015, it will be on permanent public display in a new interactive exhibit within the Aquae Sulis Gallery at The Roman Baths.

Susan Fox, Collections Manager at Bath & North East Somerset Council, said: “The images on the coins are fascinating. They were the easiest way the Emperor had of communicating with his citizens, and therefore represent thousands of mini political broadcasts.”

Further dates are being planned – keep an eye on www.romanbaths.co.uk/whats_on/beau_street_hoard.aspx for all the latest news.