A chemist at the University of Bath has teamed up with the UK Barista Champion to find the best type of water for making a perfect coffee. 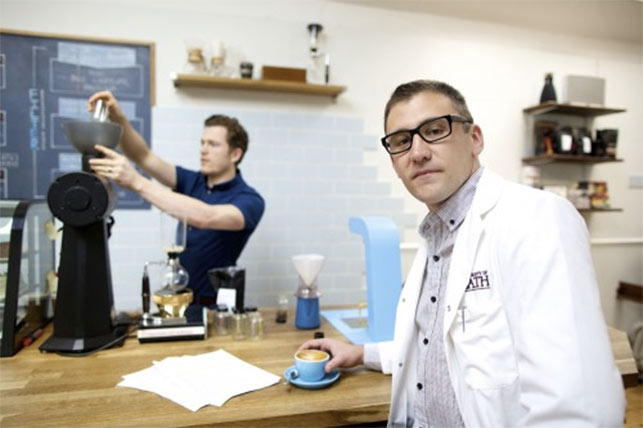 The pair are heading to the World Barista Championships in Italy on 8th June to share their coffee chemistry knowledge with the rest of the world.

Christopher Hendon, a PhD student from our Department of Chemistry, embarked on the project in his spare time with friend Maxwell Colonna-Dashwood, owner of Colonna and Small’s coffee shop in Bath, after a discussion about why the taste of coffee varies so much.

Hendon used computational chemistry methods to look at how different compositions of water affect the extraction of six chemicals that contribute to the flavour of coffee, along with caffeine. The study, published in the Journal of Agricultural Food Chemistry, found that water composition can make a dramatic difference to the taste of coffee made from the same bean.

Hendon explained: “Coffee beans contain hundreds of chemicals; the precise composition depends on the type of bean and how it is roasted. The flavour of the resulting coffee is determined by how much of these chemicals are extracted by the water, which is influenced by roast time, grind, temperature, pressure and brew time.

“We’ve found that the water composition is key to the proportions of sugars, starches, bases and acids extracted from a particular roast.”

The coffee industry uses guidelines on the ideal water for coffee extraction from the Speciality Coffee Association of Europe (SCAE), which measures ionic conductivity to quantify the total dissolved solids, however the researchers found that it was the proportions of these ions that affected the extraction and therefore the taste of the coffee.

Hendon explained: “Hard water is generally considered to be bad for coffee, but we found it was the type of hardness that mattered – while high bicarbonate levels are bad, high magnesium ion levels increase the extraction of coffee into water and improve the taste.”

The study also found that sodium rich water, such as that produced by water softeners, didn’t help the taste of the coffee either.

Hendon added: “There is no one particular perfect composition of water that produces consistently flavoursome extractions from all roasted coffee. But magnesium-rich water is better at extracting coffee compounds and the resultant flavour depends on the balance between both the ions in the water and the quantity of bicarbonate present.”

Maxwell Colonna-Dashwood, co-author on the paper, said: “Unfortunately most of the time you are limited by the source water available. Water from the tap varies regionally and from day to day depending on how much it rains – the only way you can get consistent quality is to use bottled water, but even then not all waters are the same.

“For the Championships we test the local water and then select the roast that is most suitable for that particular water. For example you could use a heavy roast with a soft water as it doesn’t extract very much, but with hard water it would extract too much and give a bitter taste, so it would be better to use a lighter roast.

“Traditionally the coffee making industry is most concerned about using water that doesn’t scale up their machines. But we argue that more value should be placed on the flavour of the coffee and want to use chemistry to help people make the best coffee they can with the water they have available.”

Maxwell Colonna-Dashwood won the UK Barista Championship in April and will represent the UK at the World Championships in Rimini, Italy from 9th June.

The competition takes place over four days, with baristas from 50 countries vying to become World Barista Champion. Each competitor must prepare four espressos, four cappuccinos, and four original signature drinks to exacting standards in a 15-minute performance set to music.

Each entry is judged on the taste of beverages served, cleanliness, creativity, technical skill, and overall presentation.

Hendon and Colonna-Dashwood are now planning to share their knowledge on the science behind making the perfect coffee in a book.

Curo set for Government award thanks to high-quality work placements