A small section of Bath Abbey’s floor will be lifted and repaired for the first time in over 100 years as part of a trial for the Abbey’s transformative Footprint project. 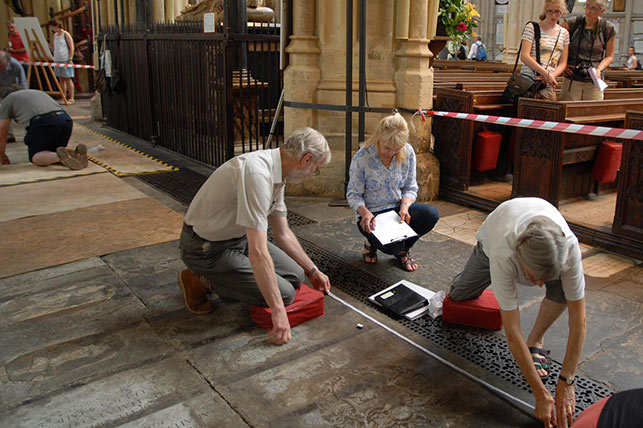 New under floor heating will also be installed under this section of the floor to trial the process which will eventually take place under the whole of the floor in the Abbey. The work has been made possible thanks to generous donations from the Coles-Medlock Foundation and Brian and Margaret Roper.

The trial work will begin in early July and is scheduled to last until the end of the year. The Abbey will remain open throughout the work however the entrance to the Abbey will be temporarily moved to the entrance nearest the Roman Baths, beside the Abbey shop.

Five small trial excavations of the floor which were undertaken in 2011 and 2012 revealed that the Abbey’s historic floor is at risk. Through time and regular use the floor is collapsing and leaving large voids, some of which extend under the structure of the building.

An area sized 50 metres square in the north aisle of the Abbey will have pews temporarily removed, and the stone floor lifted.  Voids beneath the floor will then be carefully filled, drilling down to about 2 metres. Once the repair work has been completed under floor heating will be installed and a stone floor re-laid. The heating system will then be monitored for its effectiveness over a period of twelve months.

Volunteers from the Abbey and NADFAS (National Association of Fine and Decorative Arts) will be working during the early part of the project to record details from the ledger stones which have been hidden underneath the pews since they were installed in the 1870’s during the Gilbert Scott renovation of the Abbey. The ledger stones will be carefully lifted and stored securely during the work.

Charles Curnock, Bath Abbey’s Footprint Project Director, said: “This is the beginning of an exciting time for all involved in the Footprint project. Many churches have a similar problem with their floor but none as large, or as busy, as Bath Abbey. We want to ensure the Abbey remains open and available to all throughout the repairs. Therefore we are working on just 5% of the floor whilst temporarily moving the entrance and exit doors. This trial will be a good opportunity for visitors and local people to discover more about the Abbey’s historic floor and see first hand the work taking place.”

The work will be done by building contractors, Emerys of Bath with Bath based engineers and architects: Feilden Clegg Bradley Studios, Mann Williams, Bare, Leaning and Bare and Buro Happold.