Bath and North East Somerset Council have announced that they’ve had to close five public toilets in the local area, due to a lack of funding available to keep them open. 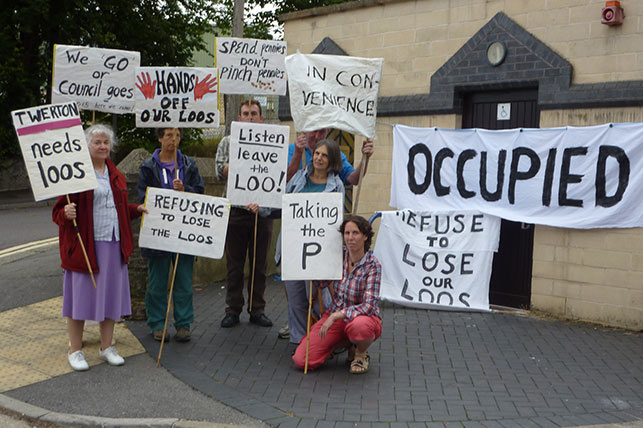 The Council is still however progressing with plans to revamp the provision of other toilet facilities across the district.

The Council’s contract with Healthmatic Ltd will provide cleaning and management services for 15 years, and means that 15 public toilets in parks, play areas, green spaces and key transport hubs will remain open.

Improvements works have been completed at Monmouth Street in Bath city centre and at Odd Down Park & Ride, with the modernised facilities already receiving positive feedback from residents. Work on facilities at the Sandpits play area and Two Tunnels cycle path in Oldfield Park are underway and improvements to the remaining toilets will take place over the summer and autumn.

However, in order to deliver the improvements within the budget available the Council has confirmed that from yesterday (14th July) it has to close some public toilets.

Cllr David Dixon (Lib Dem, Oldfield), Cabinet Member for Neighbourhoods, said: “We have to get the balance right between offering high quality, well placed public conveniences and making sure we have an affordable proposition for local taxpayers for the long-term future of these facilities. In accordance with a Council resolution, we kept the toilets open whilst we were exploring alternatives.

“We have been trying to work with local communities and businesses to look at options for providing facilities in these locations, but no concrete ideas have been forthcoming so unfortunately we have been forced to confirm the closing of five public toilets. However, in three of the five locations, there are on-going discussions with third parties about alternative solutions for the longer-term.”

This affects the public toilets as follows:

Councillor David Bellotti (Lyncombe) commented: “We are delighted that the Council has listened to us and local residents and are now going to provide a second toilet cubicle at Alexandra Park. Increasing the number of cubicles available, from the proposed one to two, will help minimise any waiting at peak times and provide a back-up in case of one cubicle being temporarily closed – such as for maintenance. This is going to be really appreciated by visitors to the park and will provide new, excellent facilities for all.”

Councillor Katie Hall (Lyncombe) added: “The improved toilet facilities provided by the Council’s partnership with Healthmatic will be a great improvement over the current offering. I believe the new cubicles will be particularly welcomed by families with younger children as they will be large enough for a parent and children and a pushchair together.”

Opposition Conservative councillors have expressed outrage at the sudden closure of the five public toilets.

The councillors are demanding urgent answers from the Council over the reason for the sudden closure, as it had been agreed at the authority’s budget meeting in February that money would be allocated to enable the toilets to remain open for a further year whilst alternative options were being investigated.

Conservative Group Leader Cllr Tim Warren said: “This demonstrates that just how much to Council isn’t listening to local people.  Residents are understandably angry at the sudden nature of these closures, which have taken place without any consultation or prior warning.

“As part of the Council’s budget, agreed in February, additional funding was put back into public toilets to allow them to remain open for another year whilst alternative options were considered.

“Instead the Lib Dems have reneged on this and ploughed ahead with the toilet closures before alternative provision has been agreed and put in place.

“We are demanding answers from the Council as to why this sudden closure has happened, which goes against the spirit of what was in the Council’s budget.”

Councillor Colin Barrett (Cons), who represents Weston village, said: “People in Weston are outraged by this sudden closure of our public toilet.  We feel like we have been totally misled and let down by the Council.  Even I, as the local councillor, wasn’t warned about this.

“Over the past year I’ve been involved in negotiations with Tesco which have seen the company agree to include public toilet provision within their revamped Weston store.  But as Tesco is at the other end of the High Street to the current public toilets, I believe that residents deserve to be consulted on whether they feel this to be a reasonable alternative before the existing toilets are closed down.

“What’s even more concerning is that the Council clearly still has no real idea what it will do with the toilet block.  We certainly do not want an empty derelict toilet block blighting our High Street.”

Cllr Karen Walker, Vice Chairman of the Parish Council has campaigned for their retention over the last year. Following the announcement, she said: “The closure of these toilets has little support. With a village the size of ours, it’s paramount that residents and visitors have access to good quality public toilets.

“Local businesses, residents, community groups, the Residents Association and the Parish Council are all opposed to their closure.

“Peasedown St John is a village in need of more services and amenities, not less. With almost 7,000 residents it’s important that we have the investment our village needs.”

Mandy Clarke, Secretary of the village Residents’ Association said this was a sad day for Peasedown St John: “The battle to keep the public toilets open was difficult, but we tried. With less services in a growing village, I’m concerned about how the elderly, disabled, ill and parents with young children will be able to cope. B&NES Council should be supporting the vulnerable, not making their lives more difficult.”

The campaign to keep the loos open was led by Cllr Nathan Hartley, who resigned from the ruling Liberal Democrat party in January, due to their lack of support for the provision of good quality public services in his home-village.

Nathan added: “I’m hugely disappointed, but not surprised by this announcement. We’ve certainly done our best to show the council that there is a need for these toilets – but when the leadership isn’t listening it can be like hitting your head against a brick wall.

“One of the things I know residents in Peasedown are frustrated about is when they see millions of pounds being spent elsewhere across the district, yet we are told there is no money for Peasedown – that is what hurts the most.

“We just won’t buy the argument that funding is an issue when we see £34 million being invested in Keynsham, millions in Radstock, and millions in Bath for ‘pet projects’ in areas where Lib Dem councillors have small majorities.

“In reality, here in Peasedown St John and Carlingcott, we’ve been worse off since the Lib Dems took control of the council. We’ve seen cuts to our childrens centre services, road maintenance budget, tree works services, CAB services, and now the closure of our public lavatories.”