The Council and the Environment Agency are about to start work on a £6.22 million project to transform the riverside in Bath and improve city centre flood defences. 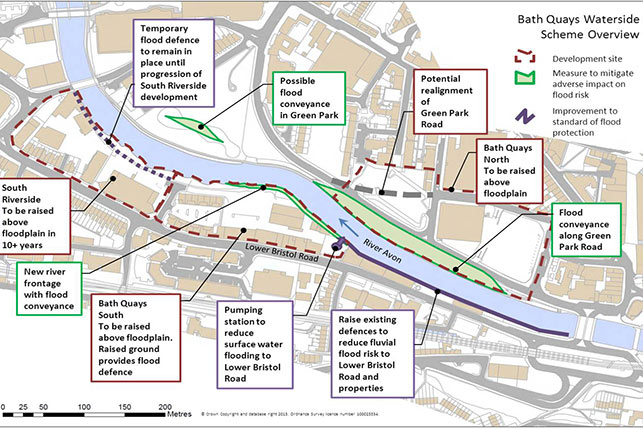 The Bath Quays Waterside project, which was given planning permission last week, involves flood mitigation and defence works to the north and south banks of the River Avon, between Churchill Bridge and Midland Bridge.

Expected to be completed by the end of 2016, the project will reduce flood risk for over 100 existing residential and commercial properties; reconnect Bath to its riverside with a new riverside park, and enable the development of Bath Quays, a new office and creative quarter.

In order to create these new riverside spaces, new flood walls are being put in and the river widened to improve flow during times of flooding; initial work will begin this week to remove trees and vegetation between Green Park and Churchill Bridge.

To make room for the flood defence works, around 70 trees, many not native to Britain, will need to be removed, but when completed, 150 new native British trees will be planted including willow, alder, field maple, birch and lime trees.

“The transformation of this waterside place will include new promenades at different levels creating new routes for cyclists and walking, and new space for outdoor performances and events.

“The new public realm has been modelled on best practice from Europe to help the City reconnect with the River Avon.”

Cllr Paul Crossley, Leader of the Council, said: “We have timed this work to coincide with safety improvements along the river including the installation of new river safety railings alongside Broad Quay and from Widcombe Lock to Churchill Bridge.

“We are also working with Avon Fire and Rescue to develop more robust, vandal-proof cabinets for life-saving equipment; a prototype cabinet is under construction and user testing will be taking place later in February.”

Ed Lockington from the Environment Agency said: “We are pleased to work with Bath & North East Somerset Council on this project which will reduce existing flood risk in Bath and help provide exciting redevelopment opportunities.”

The Bath Quays Waterside project forms part of the Bath City Riverside Enterprise Area which will transform the riverside, delivering up to 30,000 square metres of much-needed modern, office accommodation for the city, alongside improved pedestrian and open spaces.