An innovative new IT project launched by City of Bath College to give students a taste of the world of work is proving a big success. 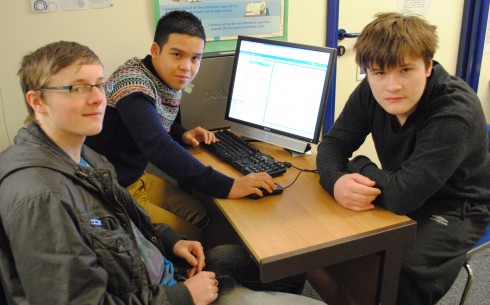 Talented IT students have set up a computer helpdesk at the College to assist fellow learners with their computer queries.

Groups of BTEC Diploma Level 2 IT students are running the helpdesk and are dealing with a range of queries, from printers jams and ink cartridge replacements to password re-sets and formatting enquiries. A series of IT user guides have also been created to help students across the College with their IT troubles. Extended Diploma Level 3 IT students will set up and run a second helpdesk from March.

The helpdesk was initially set up to assist students, but has proved such a success that tutors have been contacting the budding Bill Gates’ for computer support too.

Each of the helpdesk teams consists of a project manager, helpdesk manager, IT application developer and IT publicity manager. In addition, the Diploma Level 2 students are carrying out roles as website designer and IT administrator. Students had to go through a formal interview process before being appointed to one of the ‘jobs’.

The students are supervised by IT lecturers, but plan and manage their workloads independently.

Daisy Walsh, Head of the College’s Engineering, Construction and Computing department, said: “The project has proved even more successful than we hoped it would be. The students have really got into it and have become much more professional as the project has gone on.

“They have been dealing with a range of queries. At the start, the enquiries were quite straightforward but as word has spread around the College about how useful the helpdesks are, the enquiries have been getting more and more challenging.“

IT lecturer Lolita Austin said: “It’s great to see how providing students with a real-life work situation has captured their imagination. We’ve even had other groups of IT students asking us if they can be involved in their own helpdesk projects.

“City of Bath College is committed to providing students with real-life industry projects such as these to prepare them for the world of work and ensure they leave the College with vital employability skills which will give them the edge in an extremely competitive jobs market.

“The success of this project is down to the hard work of all of the College’s IT lecturers and our talented students.”

For more information about IT courses at City of Bath College call 01225 312191 or visit www.citybathcoll.ac.uk  You can also drop in to the Student Advice Centre, Roper Building.